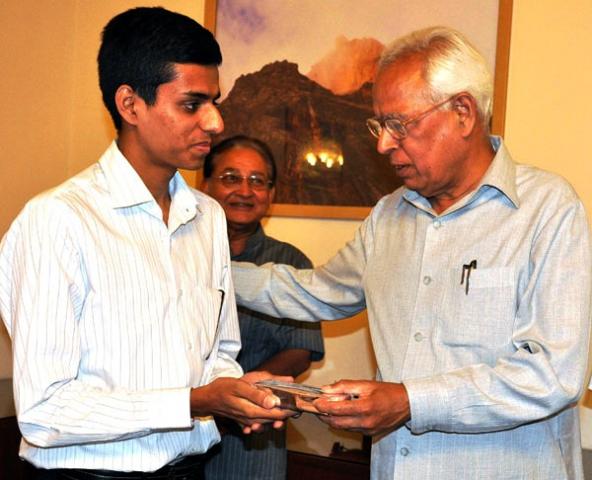 Jammu,June, 15 (Scoop News) – The Governor,  N. N. Vohra, felicitated  Akhil Langer of Jammu at the Raj Bhavan in Jammu for being awarded the President of India Gold Medal for obtaining the highest grade points among the students of all the branches of the 2006 batch while pursuing his B. Tech studies at IIT Roorkee.

The Gold Medal shall be presented to  Langer at the Convocation of IIT Roorkee, scheduled to be held in October this year.

The Governor congratulated  Langer for his laudable achievement and hoped that other boys and girls from J&K will draw inspiration from him and bring laurels to the State. He enquired from  Langer about his future plans.  Langer said that he would be joining , for M.S. in Computer Science with full scholarship and research assistantship at the Parallel Programming Laboratory.

The Governor presented a pen to  Langer and wished him a bright career ahead.

The Principal Secretary to the Governor,  Raj Kumar Goyal, President, Jammu Chamber of Commerce and Industry,  Y. V. Sharma and other members of the Chamber were present on the occasion.