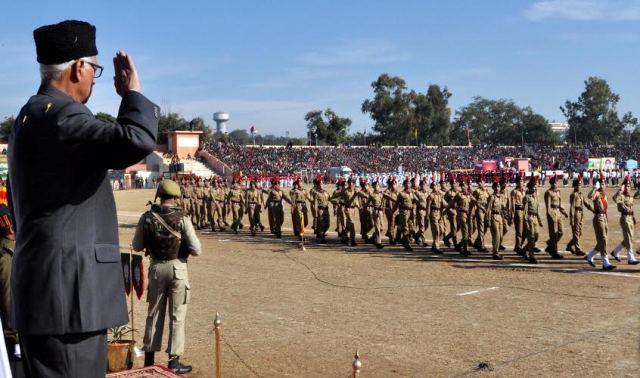 Jammu, January 26, (Scoop News)- N. N. Vohra, Governor Jammu and Kashmir, today observed that till a peaceful environment emerges our Security Forces shall continue to enforce constant vigil along the frontiers without lowering their guard.
In his address, after hoisting the tricolour at the State level function on the occasion of the 65th Republic Day, at Maulana Azad Stadium here this morning, the Governor paid tribute to the State and the Central Police Forces and the Army for their unflinching devotion to duty and paid homage to brave officers and men who laid down their lives to protect the country’s territorial integrity.
The Governor observed that on the joyous occasion of 65th Republic Day, we must pay tribute to our great national leaders who made enormous sacrifices to carry out a prolonged struggle for liberating our country from the colonial yoke. He said that many of these wise and visionary leaders also served as members of the Constituent Assembly and made invaluable contribution to the drafting of the Constitution of India which was adopted on this day in 1950.
The Governor said “our country has travelled a fairly long distance since Independence and the journey, on many occasions, has been quite difficult. Thanks to the devoted endeavours of our enlightened leaders in the initial years, significant strides were taken towards building the unity and integrity of the nation and imbuing our polity with strong secular foundations. Today, among the comity of nations, India is known and respected for being the largest representative parliamentary democracy which protects the freedom and dignity of every member of our heterogeneous societies”.
Referring to the Constitution of India, the Governor said that while the FUNDAMENTAL RIGHTS of the citizen, prescribed in the Constitution, provide the bedrock of our democratic system, it is indeed unfortunate that not even a miniscule percentage of our population is aware that our Constitution has also laid down ten DUTIES of the citizen as well the obligations in a democracy which every citizen is expected to discharge.
TheGovernor observed that terrorism and militancy, which commenced in 1990, have resulted in large human and economic losses and caused prolonged miseries for the common man. The long period of unrest has also adversely affected the functioning of the administrative machinery and public institutions, and the erstwhile work culture and efficiencies have been seriously eroded. It is necessary to fill up this gap and regain the required momentum. As we are witnessing all around, the people at large are getting increasingly impatient and restive and are no longer willing to bear with defaults and deficiencies in the functioning of public delivery systems, much less accept the continuance of corrupt practices.
Recallingthat despite certain constraints, the State was able to achieve a growth rate of 6.14 percent during 2012-13, which is higher than the national average, the Governor cautioned that to forge ahead on a sustained basis, the State of J&K needs to do much better and systematically tackle several serious challenges, particularly the problems of unemployment and the acute shortage of power in Jammu and Kashmir.
In the context of difficult power scenario in J&K, the Governor said that acute shortage of power in the State has not only thwarted the pace of optimum growth and development but also caused serious financial problems as the already overstrained exchequer has to bear the extra burden of about Rs. 2500 crore every year for the purchase of electricity from the National Grid. The State Government has been devoting high priority to enhancing power generation and, in the past five years, several projects have been launched which, on completion, are envisaged to generate 1400 mw of power. Side by side, several more projects are being finalised. He added that the Government is also paying attention towards reducing transmission and distribution losses, which still continue to be unacceptably high.
The Governor also remarked that efforts are being made to further extend and improve the health and education sectors and to enhance the productivity of the agriculture, horticulture and industrial sectors. In the arena of governance, several initiatives have been taken to enhance transparency and accountability, promote efficiency and to tackle corruption. If effectively implemented, these efforts should show early results.
The Governor observed that elections to the Parliament and the Jammu and Kashmir Legislative Assembly are scheduled to be held in the coming months. He said the electoral contests held in 2008 and 2009 and the Panchayat polls in 2011 had witnessed a very high turnout of the voters and hoped that the forthcoming polls shall see the maximum number of voters exercising their right to franchise.
The Governor, on the occasion of the Coalition Government completing five years of its tenure, complimented Shri Omar Abdullah, Chief Minister, and all members of his Council of Ministers and hoped that extra special efforts would be put in this year to achieve several important objectives which could not be attained earlier. He wished the Chief Minister and his team high success in their future endeavours.
The Governor conveyed warm greetings and good wishes to the people of Jammu, Kashmir and Ladakh and prayed that the New Year, which has already dawned, shall bring sustained peace, normalcy and prosperity in all parts of the State.