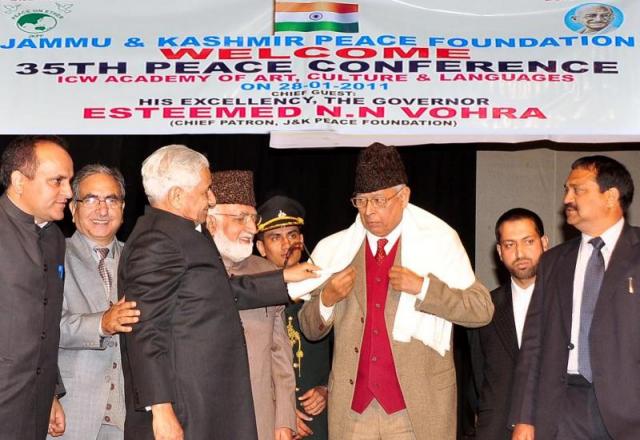 Jammu, January 28 (Scoop News) –  The Governor,  N. N. Vohra, today emphasized the need for restoration of the pristine glory of Jammu and Kashmir as an abode of peace, amity, communal harmony and brotherhood and urged upon one and all to come forward in a big way to contribute towards achieving this goal.

The Governor, as Chief Guest, was addressing the 35th Peace Conference organized by the Peace Foundation at Abhinav Theatre, here today.

Quoting extensively from history, the Governor observed that we have perhaps forgotten the past glory of . He said that thousands of year ago Kashmir was at the cross roads of four great civilizations: the Indo-Gangetic civilization; and beyond the West Asian civilization; the Central Asian civilization including and Bokhara; and the Chinese civilization through . It was also the meeting point of three vast empires – the Chinese, Indian and West Asian and the meeting point of three great religions – Buddhism, Islam and Hinduism. It was in Kashmir that there was a meeting of the Indo-European languages, the Dardic languages and the languages of . For centuries attracted merchants from all over the world. Besides, intellectuals, historians, travellers and others visited the Valley from all parts of the globe, in the centuries past. He said that has remained home to diverse religious and cultural influences which deeply enriched its pluralistic ethos. He expressed concern that all the civilizational values had suffered a severe dent during the past 20 years of terrorism and turmoil.

The Governor asserted that no development and progress is possible without sustained peace and communal harmony and brotherhood. Recalling the situation which had prevailed in the Valley during the past three summers, he said that perhaps, the sector which suffered the most was the education of the children, besides large human and economic losses. He emphasized that time has come when every one needs to come forth and work for restoration of a lasting peace in the State, to ensure a bright future for the younger generation and speedy progress of all regions of Jammu & Kashmir.

Referring to his interactions with the functionaries of the J&K Peace Foundation during the past about two years, the Governor complimented the Chairman of the Foundation,  Fayaz Ahmed Bhat, members of his team and all the associated activists for taking the highly laudable initiative of promoting communal harmony, peace and amity and wished them high success in their continuing endeavours. He emphasized the importance of spreading the message of peace in the schools and colleges.

The Governor presented awards to a number of prominent peace activists, students and others who had rendered valuable services, on this occasion.

The Governor was honoured by the Foundation in recognition of his contribution for the restoration of sustained peace and normalcy and for encouraging initiatives aimed at promoting communal harmony and brotherhood.

The Minister for Agriculture,  Ghulam Hassan Mir, speaking on the occasion, said that violence has no place in any civilized society. He said that reconciliation and dialogue are the best means to resolve any issue peacefully and making the society inclusive. He added that the people of the State want to strengthen peace and amity and the time has come for all the right thinking persons to boldly speak out and work for the accomplishment of this objective.

Ghulam Hassan Khan, Member of Parliament, said that all religions propagate the message of peace and harmony and all of us must work towards achieving these objectives. He dwelt on the various initiatives being taken by the people of Leh and Kargil districts to preserve and further strengthen communal harmony, brotherhood and peace in the entire Ladakh region.

Balraj Puri, noted journalist, complimented the Foundation for taking a laudable initiative and stressed the need for all possible steps being taken to strengthening communal harmony and amity.

In his welcome address, the Chairman of the Peace Foundation,  Fayaz Ahmed Bhat, thanked the Governor for his keen interest and patronage to the Foundation for carrying forward its endeavours for promotion of peace and amity in the State. He said that there is dire need to bring people together on a single platform with an objective of restoration of sustained peace and strengthening national integration. He added that the people of the State are peace loving and secular and the Foundation will work as a bridge to bring them together.

The former MP, Sheikh Abdul Rehman, presented a Vote of Thanks.

Among others who spoke on the occasion included Mrs. Shahzadi Simon and  Ram Singh Chauhan.

The Peace Conference commenced with an impressive all faith prayer for peace.

A cultural programme based on the composite cultural heritage of the State was presented on the occasion by the students of various educational institutions.

A large number of functionaries of the Foundation, prominent social and political activists and a large number of people were present on the occasion. Prominent among them included legislators, Sheikh Ghulam Rasool and  G. M. Saroori.