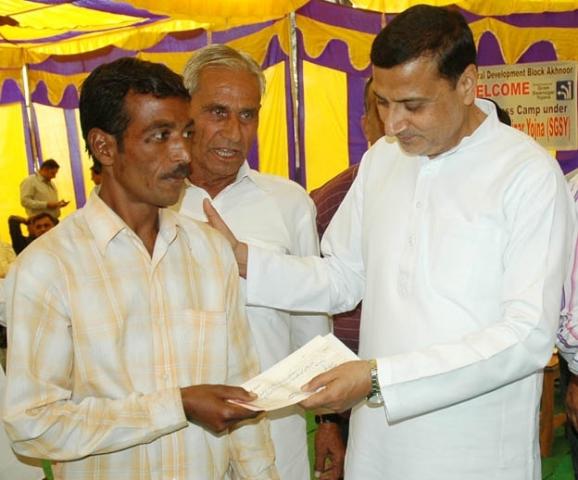 He said that the Central Government has sanctioned Rs. 4 crore for the purpose.

This was stated by the Minister after distributing cheques worth Rs.48.50 lakh as first installment among 100 Indra  Awas Yojna (IAY) beneficiaries of Akhnoor.

Giving details, he said drip irrigation units would be provided to the farmers of Kandi area who are facing crop losses due to dry spells. He said similarly irrigation tube wells would be installed to augment the available irrigation facilities where ever possible.

Sham said that the Central and State Government is fully aware of the problems of the people and they are making all out efforts to mitigate the same at the earliest. He assured   that people affected    due to   natural calamities are being provided adequate compensation. He said that it is for the first time that the beneficiaries under IAY include families other than those falling under BPL category.

Sham said that massive development in various sector like health, education, PHE, power, horticulture etc has been registered in the state because of tireless efforts of the Coalition Government headed by Chief Minister,  Omar Abdullah. He said that the State Government was committed to provide all basic amenities to the people of the state at their door steps.

The Minister said that with the launch of the RSBY scheme in the State initially it will be implemented in two main district of the state viz Jammu and Srinagar and gradually it will be extended in all the district of the state. He said that this scheme would prove very useful and the distressed section of society will be benefitted in a big way. The objective of the RSBY was to provide protection to BPL families and labour class from financial liabilities. He said the 50 percent cost of the scheme would be borne by the Central Government   while State Government will bear 40% expenditure and the beneficiary family has to pay only 10 percent.

While impressing upon the Sarpanchs and Panchs and concerned officers to speed up the pace of work taken up under the flagship     MGNREGA scheme, the Minister said that there was a need to ensure that the benefit of the schemes percolate down to the targeted populace in sustained and scientific manner.

Among others, Sarpanchs, Panchs of all segments, sectoral officers, prominent citizens and a large number of people attended the public meeting.