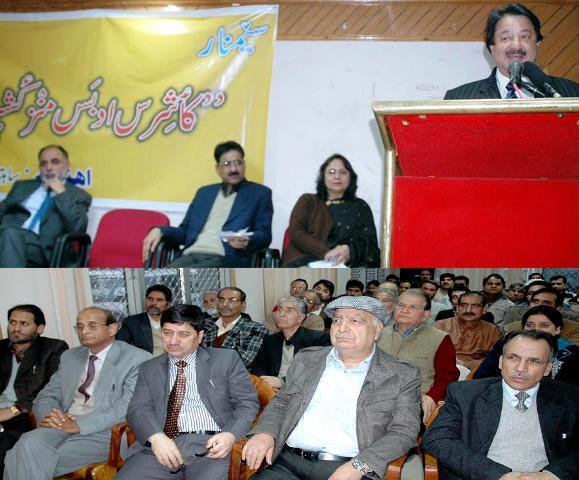 , February 04 (Scoop News) – Referring to various measures introduced to encourage regional languages, the Minister for School Education, Peerzada Mohammad Sayed today said that Kashmiri, Dogri and other local dialects have been introduced as one of the compulsory subjects from 1st to 8th standard. The Government intends to make these regional dialects as compulsory subjects in 9th and 10th classes, he added.

, Peerzada Sayed was speaking on the occasion of  inauguration of  a 2-day seminar on Kashmiri literature, organized by , at K.L. Sehgal hall here today.

Congratulating the organizers for holding such an informative event, the Minister hoped that the seminar will help in the promotion of Kashmiri language in a big way.

Peerzada said acquaintance of young generations with their respective regional languages is a must as without the basic knowledge of mother tongue the overall development of children is hampered. He said a language is a repository of cultural ethos, social values and traditions of a specific area which ensures a dignified identity to an individual.

He said that the department has been asked to train the teachers in specific subjects to make the education more logical and result-oriented. He said any drawback in this regard would be looked into so that people’s expectations could be met. He said Government is committed to promote all regional dialects of the State and sought active cooperation of prominent literary personalities in this regard.