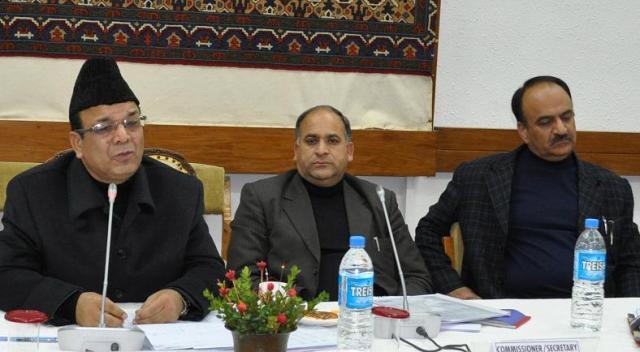 Srinagar, February 03 (Scoop News) – The Government would complete cent percent metering of the electricity supply by ending 2013 to ensure judicious consumption of electricity and to check power thefts effectively. About seven lakh electronic meters would be installed during the period in all the towns and villages which is mandatory as per the J&K Electricity Act 2010. Government would provide every possible logistic support to Power Development Department (PDD) in this regard.

Announcing this while reviewing the revenue realization and energy supply by the PDD to the consumers at a high level meeting here today at SKICC, Srinagar, Minister for Finance and Ladakh Affairs,  Abdul Rahim Rather said that effective metering was necessary for providing better and assured power supply to the consumers adding that the PDD should convince the people that metering system is people friendly and in the larger interests of the common masses. He said a sustained and vigorous awareness campaign needs to be launched through print and electronic media about the repercussions of power theft adding that the government supplies about 850 MWs of power to the consumers against 300 MW agreemented load which was against the interests of the state and unconvincing before the Planning Commission of India.

Rather asked the department to complete computerisation of billing system positively by ending April to check pilferage of revenue and also for the overall convenience of the consumers by minimising direct interface of consumers with the field functionaries of PDD. He said metering and computerisation of billing system would be important milestones in bringing reforms in the power sector.

Rather urged for safeguarding revenue interests of the government adding that state’s overall development is subservient to better revenue generation. He called for extra efforts of the officers and engineers of the PDD to complete the revenue realisation target of Rs. 592 crore this fiscal.

Shabir Ahmad Khan called for consumer friendly initiatives and improvements in services by the PDD.

Basharat Ahmad called for completing the metering of power supply as a mission adding that this intervention was the most effective tool for streamlining the power distribution and revenue realisation system at desired level. He also suggested outsourcing the process of computerised billing and expressed satisfaction over the PDD functionary’s bold initiative of conducting inspections to fine violators for power theft.

The Chief Engineer, while giving resume of the activities of PDD said that revenue to the tune of Rs. 245 crore has been realised by ending January 2011 as against Rs. 212 crore during corresponding period of last year marking an increase of about Rs. 33 crore. He said this year five percent more electricity has been supplied to the consumers. Last year about 4.68 trillion units of power (TUs) were supplied to the consumers, he added.

Giving details about surprise inspections conducted by the field officers, he said a fine of about Rs. 40 lakh have been imposed against consumers for indulging in power theft. Through a power point presentation, he showed how some well-off families too are resorting to power thefts through unfair means.