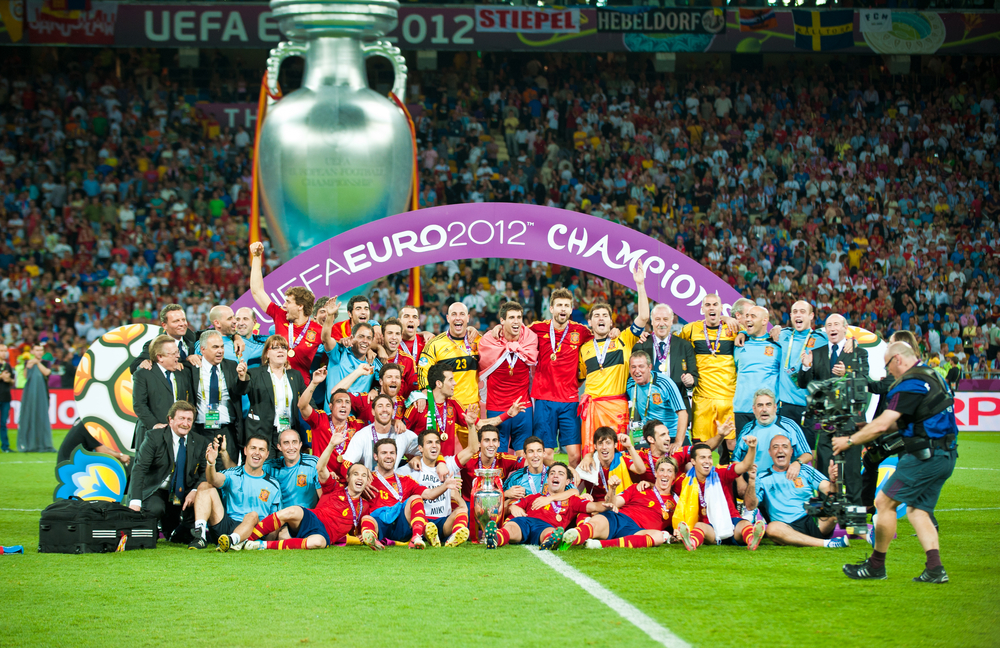 There has been a substantial amount of debate over the best ever international football team, but this debate is usually focused around the World Cup – and the plaudits are inevitably taken by Maradona’s Argentina and Pele’s Brazil. But who are the greatest ever European Championship team? Popular opinion would suggest six possibilities across four countries – West Germany (1972), France (1984, 2000), Holland (1988) and Spain (2008, 2012). So let’s have a look at the merits of each of these teams:

The vibrant West Germany team of 1972 played a unique sweeper system in a 1-3-3-3 formation (something you’d never see in the modern game). The team was full of incredible footballers, but the three that are best remembered by history are frightening trio of Beckenbauer, Netzer and Muller. The attacking sweeper Beckenbauer, who moved from midfield to make the sweeper role his own, epitomised the fluid brand of ‘total football’ exhibited by the German team and his marauding runs from the back and calm, stylish brand of defending set the tone for the rest of the team. Netzer, the arrogant ‘luxury’ player so chastised by modern pundits was probably the most talented of the three; seemingly playing half of his games at walking pace, his effortless approach to the game was forgiven due to his stunning improvisations and pinpoint passing. Up front, Gerd Muller was the classic striker with an uncanny ability to find the net from anyway in the penalty area. A true poacher, Muller often scored scrappy goals from close range but there was no question of his ability being down to luck, scoring an incredible 735 goals for club and country throughout his glittering career.

Beating the USSR 3-0 in the final, the West Germans went on to win the World Cup two years later and their performances during the 1972 European Championships cemented them as one of the greatest Euro teams ever to grace the competition.

The 1984 French team featured what many consider to be the greatest midfield in footballing history – the so-called Magic Square of Platini, Tigana, Giresse and Fernandez. Passing the ball around with an effortless ease, the midfield quartet contributed to this team winning all of their matches in the 84 Championship, and all 12 games they played in the year as a whole. The most memorable player of the midfield four (and one of the best players in any French midfield) was Michel Platini, who scored nine times in five games to help hosts France lift the trophy – their first major tournament win.

France narrowly beat a talented Spain team in the final, but nobody could deny that the hosts were the best team that year (and to this day the only international team to win all of their European Championship games), particularly after their epic 3-2 win over Portugal in the semis, and an absolute hammering of Belgium before that.

After the incredible performance of France in the 84 competition, many people expected them to be the best team at Euro ’88, but the mesmerizing Holland team had other ideas. Eager to make up for the misery of the 1970’s, Rinus Michels took a Holland team to the 1988 tournament that featured Marco Van Basten, Ruud Gullit, Frank Rijkaard and Ronald Koeman as their spine. Celebrated purveyors of the Total Football so often attributed to the great Dutch teams, their brilliance started from the back with the superb partnership of Rijkaard and Koeman. Not only were they strong defensively, but the passing ability of both started many of Holland’s attacks, making them incredibly difficult for other teams to stop. Add to that the creative brilliance of Gullit and the undeniable goal-scoring talents of the legendary Van Basten and you’ve got one of the most pleasing international teams in Euro history.

Sure, they needed a bit of luck to win the tournament, but their incredibly semi-final win against the Germans and Van Basten’s stunning volley in the final will ensure this team is forever remembered by footballing history.

As someone who was born in the early 1980’s, this French side were the first international team to truly grab my attention and their Euro 2000 kit will be forever etched in my memory. Their team was full of footballers of such exceptional quality that it should have been no surprise to anyone they won the tournament – the shot-stopping brilliance of Barthez, the defensive partnership of Blanc and Desailly, the solid defensive midfield tackling of Viera, Deschamps and Petit and the irresistible combination of Zinedine Zidane and Thierry Henry in attack.

This team had absolutely everything – pace, quality, steel, finesse and yes, even a bit of luck. But even taking Raul’s missed penalty in the quarter finals into account, nobody could deny that France deserved to follow their 1998 World Cup win with European domination.

There’s no denying that Spain dominated during their 2008 and 2012 wins, but they did it in markedly different ways. Although the two teams shared severa; players (Xavi, Ramos, Casillas, Xavi, Fabregas, Iniesta), the 2008 team was infinitely more fun to watch. Debuting their much celebrated (and equally maligned) ‘tiki-taka’ style of football, Spain dominated games with their incredible volume of passing. In the 2008 tournament they played with two centre-forwards (David Villa and Fernando Torres) and they were exciting, fluid and free-scoring. Four years later, Spain played a false-nine system with no recognised strikers, and although they were much harder to beat (they conceded only one goal throughout the tournament and had an overall 70% possession), they were bordeline boring to watch.

Whatever you think of the Spain side’s of 2008 and 2012 there’s no denying they were the best team of the respective tournaments, and two of the greatest teams ever to grace a European Championship.

Whether or not 2016 will produce a truly great team remains to be seen, but I’m certainly looking forward to the drama and passion of another international tournament.