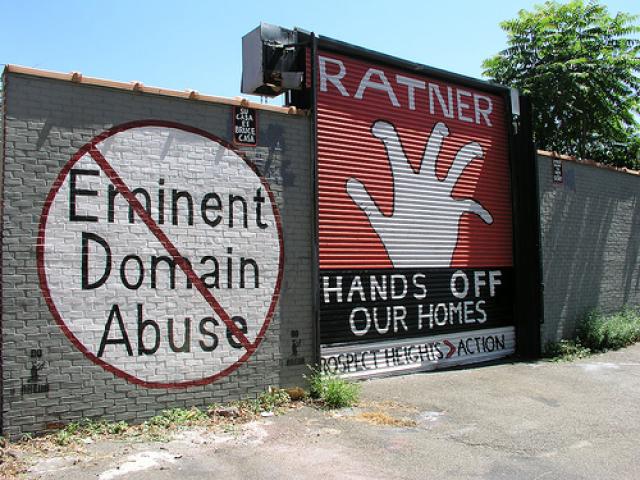 Real estate developer Forest City Ratner, headed by Bruce Ratner, will seek more subsidies from New York City taxpayers for the Atlantic Yards development in Brooklyn.  The project includes an arena for the Nets basketball team, which Ratner recently purchased.   The project will employ eminent domain in downtown Brooklyn to transfer property from existing owners to the developers.

The story was broken by blogger Norman Oder of the Atlantic Yards Report  http://www.dddb.net/php/press/080407MoreSubsidy.php.   Over $305 million in city subsidies are not enough. There are subsidies from New York State as well and the eminent domain action is carried out by the Empire State Development Corporation (ESDC), a NY State agency.  Thus the attempts of property-owners to defend themselves in court are combatted by state taxpayer-paid lawyers.

I wonder whether eminent domain supporters such as Senators Clinton and Schumer have steered federal funds to this project and whether other funds have come from the decisions of federal agencies.  That means that all American taxpayers are picking up the tab for this legalized theft.

It is not suprising that Forest City Ratner, which was a partner of the New York Times in an eminent domain scheme for the newspaper’s new headquarters, should need more money.  As I noted in my article "Atlantic Yards Eminent Domain Abuse Scheme Confronts Reality" https://www.groundreport.com/US/Atlantic-Yards-Eminent-Domain-Abuse-Scheme-Confron which links eminent domain with the money issue and economy in general, the expansion of the money supply encourages malinvestments.  Similarly, the availability of subsidies and eminent domain encourage uneconomic schemes.

(Richard Cooper is the export/import manager of a Long Island manufacturing firm.  He is the former Chair of the Libertarian Party of New York www.ny.lp.org.  The group is holding its state convention on Saturday, April 26th at the Reception House in Flushing, Queens, NY.  It will have psychiatrist Dr. Mindy Thompson Fullilove of the Root Shock Institute www.rootshock.org as a speaker on how urban renewal ruins America.)