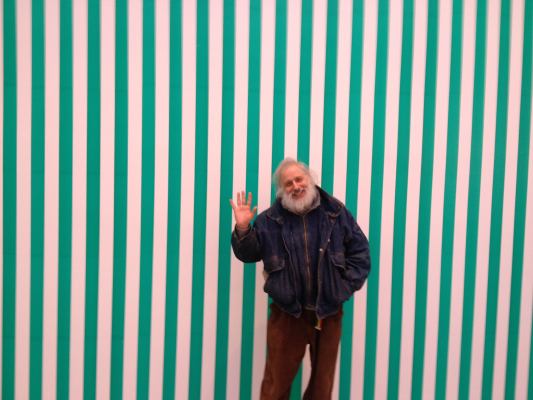 That’s me in the picture to the left standing in front of an artwork by Daniel Buren, a French conceptual artist, who decided in 1965 that he liked a particular pattern of stripes he saw in a fabric store in Paris, and has been making them ever since — sometimes as “street art,” anonymously pasted on city walls. In the 1960s, Buren said: “Perhaps the only thing that one can do after having seen a canvas like ours is total revolution.” (“Ours” refers to the art group he was then in, BMPT.)

The photograph was taken by my friend Mike Topp, the post-geometric poet. Here’s a sample of his work:

If there’s one thing that really ticks me off, it’s the meaninglessness of life.

Mike took the photograph with his phone (at the Petzel Gallery, in Manhattan). The show is entitled “ELECTRICITY FABRIC PAPER VINYL… Works in Situ & Situated Works from 1968 To 2012.”

Those stripes are ugly, don’t you think?

The color, I mean.

And maybe the stripes themselves.

I am waving, like a tourist at the Eiffel Tower — partly to disrupt the vertical momentum of the stripes. I want to be the Where’s Waldo? of Chelsea.

After this show, these stripes — which are really wallpaper — will be pulled down and thrown away. But don’t worry, you can still buy an original Buren. He — or one of his functionaries — will visit your household and craft a “customized” bunch of stripes for you.

You can’t see in this photo, but the wallpaper-gluers had some trouble, and there are a few bumps — which gives the show extra “meaning.”