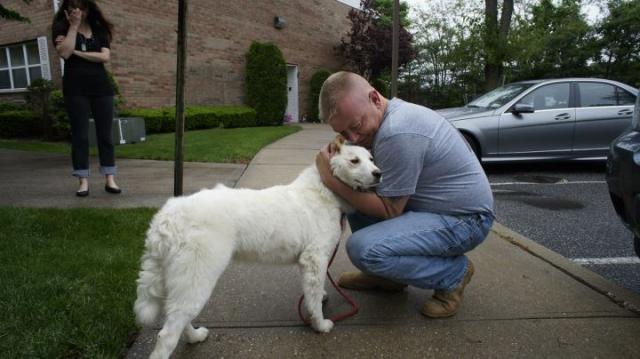 SMITHTOWN, NEW YORK – (March 19, 2013) – Guardians of Rescue, an organization whose mission is to help animals, will be headed to Fort Bragg, N.C. on March 25, 2013, to pick up a group of rescued dogs. The group will be working with their Soldier-to-Soldier program to help place the dogs with veterans suffering from post traumatic stress disorder (PTSD), as well as with other Soldiers. They will rescue the dogs from the Ft. Bragg Animal Shelter & Adoption Center, which is located on Ft. Bragg, home of more than 56,000 Soldiers.

“We are ready to help rescue these dogs and place them with as many veterans as we can, to assist with their therapy,” explains Robert Misseri, president of Guardians of Rescue. “We will place as many of the dogs as possible with vets, and beyond that will work to find good homes for the rest.”

PTSD is a condition among military veterans. It is a psychological condition that can arise after someone has experienced a traumatic event, such as being directly involved in combat. It is estimated that around 400,000 veterans currently suffer from PTSD. Animal therapy has proven to be beneficial in helping veterans overcome the condition. PTSD, according to the National Institutes of Health, changes the body’s response to stress. Some of its symptoms include flashbacks, upsetting dreams, feeling emotionally numb, hopelessness, memory problems, and avoiding doing things that were once enjoyed.

Guardians of Rescue has a program called “Soldier to Soldier,” where they pair up shelter dogs with veterans suffering from PTSD or other psychological conditions. Veteran Army Corporal John Wallace heads up this program to help the soldiers. He teamed up with the organization after they sent him “Tommy,” a dog who the soldiers cared for during the war in Afghanistan known as “Operation Enduring Freedom”. Together, they have helped transport 10 dogs from Afghanistan to the United States and have reunited them with the U.S. soldiers who cared for them during combat.

“Many times, soldiers rely on the dogs during war time and create special bonds with them,” explains John Wallace. “But when the troops finally leave, the animals are just left to fend for themselves, and often become targeted. Reuniting these soldiers with the dogs they had while deployed is therapeutic.”

The Soldier to Soldier program that the group is implementing helps those who must leave their pet behind. They find homes with other soldiers, so that one military member is helping another one out. All of the dogs rescued from the base will be placed in homes.

“We want to do all we can to help rescue these dogs, as well as help the veterans of this country,” added Misseri. “Our trek down to Fort Bragg will bring a lot of good to both sides, as we make good matches. Fort Bragg has been very supportive of our efforts and organization.”

“Working with Guardians of Rescue is a win-win-win for all parties, the service members suffering with PTSD, the animals we have rescued and our Animal Control and Adoption Center,” said Colonel Jeffrey M. Sanborn, the Fort Bragg garrison commander. ”This is a great example of how our Soldiers are being supported by communities nation-wide.”

Guardians of Rescue provides assistance to animals out on the streets, helping to rescue them, provide medical care, food and shelter, and find foster home placement. Many families are still struggling to recover from the storm, making it difficult to care for their pet, either financially or while living in temporary housing. To learn more, or to make a donation to support the Guardians of Rescue, log onto www.guardiansofrescue.org, Facebook page www.facebook.com/guardiansofrescue

or the charity auction can be found here:  http://givingworks.ebay.com/charity-auctions/charity/guardians-of-rescue/76791/.

Filed under: Lifestyle, US
Share Tweet Pin G Plus Email
previous article: Erotica from Angola
next article: AFRICAN UNION IN SUPPORT OF OGIEK