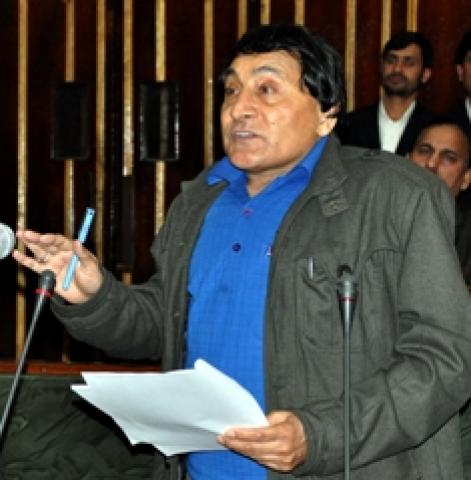 Jammu,March 13  (Scoop News) –  The House today unanimously passed grants amounting to Rs. 94166.87 lakhs for the year 2012-13 in favour of the departments under the charge of Minister for Consumer Affairs & Public Distribution (CA&PD) and Transport,  Qamar Ali Akhoon.

After moving the demand for the grants, the Minister in his reply to debate in the House said that the state is getting 63067 metric tonnes of food grains per month from the centre. He said the population of the State as per the 2001 census was 101.44 lakhs i.e. about two lakhs more than the estimated population as on 1.3.2000. The food grains allocated to the state is, therefore, not adequate to meet the requirements of the population of the state, he added.

Akhoon said that the requirement of ration as per the prevalent scale for the family units based on 2011 census come to 79560 tonnes against the current allocation of 63067 tonnes. The gap of 16500 tonnes is met by the state from the additional allocation made by the Union Government from time to time. During the year 2011-12 the Union Government has made additional allocation of 108197 MTs of food grains,  Akhoon added.

The Minister said that the status of lifting of food grains by the state has been very satisfactory and was also appreciated by the Union Minister of State for Consumer Affairs, Food & Public Distribution, during his visit to on October 18, 2011.

Akhoon said under Rajiv Gandhi Gramin LPG Vitrak Yojna, about 65 block level locations have been identified for setting up of new Gas Distribution Centers across the state in first phase. All other block headquarters will be covered in the IInd phase while as in the third phase all big villages will also be covered so that this modern fuel reaches every nook and corner of the state. This will not only reduce the scarcity of LPG, which has been witnessed in the recent past but will also save our natural resources like forests from exploitation, he added.

The Minister said that the process for bringing Gas through pipeline to has begun and recently a team of Gujarat Petronet Limited was in to conduct survey as per the directions of the Union Ministry of Petroleum and Natural Gas.

Regarding computerization of Targeted Public Distribution System (TDPS),  Akhoon said that the State government is committed for the modernization of the TPDS in accordance with the directions of the Supreme Court, adding that under these directions the process involved in the system has to be computerized. He said that for end to end computerization system, an action plan has been prepared and sent to the Union Government. The project is envisaged to be completed at a cost of Rs. 74.12 crore during a period of three years commencing from 2011-12 to 2014-15. The project envisages computerization of supply chain management, beneficiary authentication and distribution authentication, he said and added that the computerization of TPDS will not only bring in the much needed transparency in the working of the department but will also prevent pilferages and leakages.