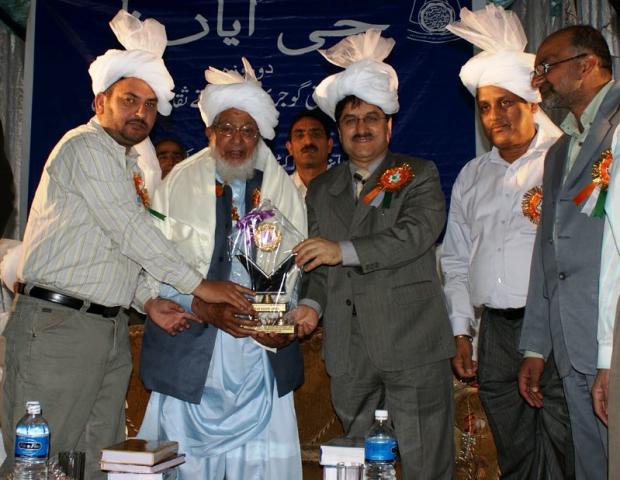 Gojri Writers Poets , Intellectuals and observers today adopted a seven point resolutions for the development of Gojri language and Culture including its  inclusion into eight schedule of Constitution of India  .

The resolutions were unanimously passed by the writers on the  second and final day of two  day long Gojri  Ethno-Cultural Conference organized by Jammu and Kashmir Academy of Art, Culture and Languages. held in

The other resolutions which were adopted includes opening of  Gojri Department in Jammu and Kashmir Universities , due share on Doordrashan and Radio including daily programme and News bulletins  from AIR and DD Jammu and Srinagar, introduction of Gojri up to 12th standard through state Board of school Education, recognition of Gojri by  Sahahity Akademi New Delhi, declare Gojri speaking people as ethno-Linguistic Minority and strengthening of Gojri wing o f State Academy of Art, Culture and languages.

Addressing the concluding ceremony of the conference prominent Gojri Scholar Ch.M S Wasil said that the writer fraternity of  Gujjar tribe must understand their duties and act in accordance with the tribal psyche of the community. He impressed upon the intellectual sect of  community to join hands for fastest development of modern Gojri literature and work hard for preservation of centuries old tradition of Gujjars.

Dr. Javaid Rahi, Head of Gojri Wing of JKAACL  said that the two day deliberations were  really a historic one  and it  has for reaching impact on the development of Gojri Language and Culture. He said that the outcome of this event was quite encouraging  and the suggestions given by our writers would be considered when the Academy will formulate some new policies about Gojri.

Ch Naseem Poonchi in his presidential remarks said that Gojri is facing a big threat due to rapid development and we should formulate a programme so that this oldest language could be preserved for all generations to come. He said on the other hand we must take the advantage of latest technology for promotion of Gojri.

Earlier Padam Bhushan Mian Bashir Ahmed  was honoured by Academy for his contributions towards Gujjars.

Prior to this  5 papers about history , culture , folk-lore and language of Gujjars were presented in the paper reading sessions fallowed by a short story reading session in which 4 latest short stories were  presented

The programme conclude with a State Level Gojri Mushaira . Abou 50 poets from allover the state participated.