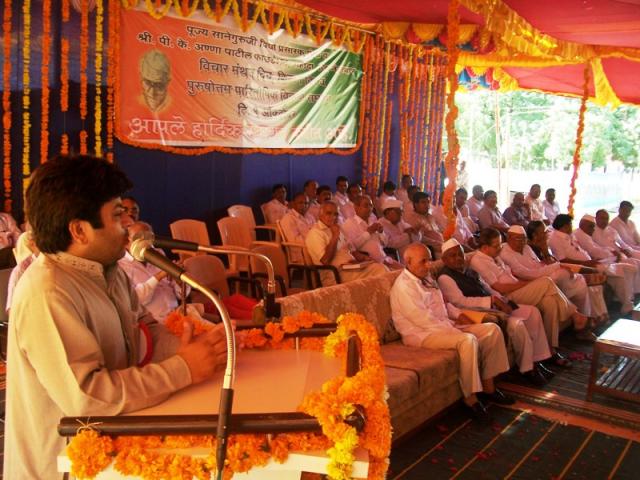 It was 88th birthday celebration of Sabha’s National President who sacrificed his whole life for the betterment of the orgainsation and upliftment of downtrodden and deprived section of the society. The contribution of . P.K.Anna Patil in the service of humanity and his particular efforts to spread education amongst the most neglected tribal communities and areas of the country is highly appreciable for the new generation.

Efaq-Ur-rehman Poswal state President while addressing a huge gathering from all around the country expressed his confidence and pleasure that under the able stewardip of .P.K.Patil the most deprived people of the country are awakened towards their progress and rights and at present they are able to fight for justice only because of noble and vibrant leaderip of. P.K.Anna Patil.

Poswal praised the efforts of Sonia Gandhi Chairperson UPA and Hon’ble Prime Minister of India Dr. Manmohan Singh while addressing the gathering for issuing the most important and dignifying identity card in the history of India for the first time to recognized the most rarer of the rarest deprived class of the society and boost their moral while recognizing their services in regard of their upliftment of their culture and development of the area. Furtherpeople of the area feel honor and their moral will be boost to upliftment of the coming generation in the field of education and civic amenities. The step which congress government intitated in this direction at most down trodden village of backward area of Nandurbar.

Subsequently  Poswal comparing the condition of that area with the most backword and terrain condition of where Gujjar Tribal community living in such a condition and stressed that their miserable condition to be looked in .

Poswal specifically apprise the National Leaders the prevailing situation of and Kamir and role of Gujjar Samajh in its solution having one third population of the State.

He on the occasion appealed the participating gathering for united struggle to achieve the target of political reservation both at centre and state level and also separate tribal ministry in all the states of the country to safe guard the interest of the community.