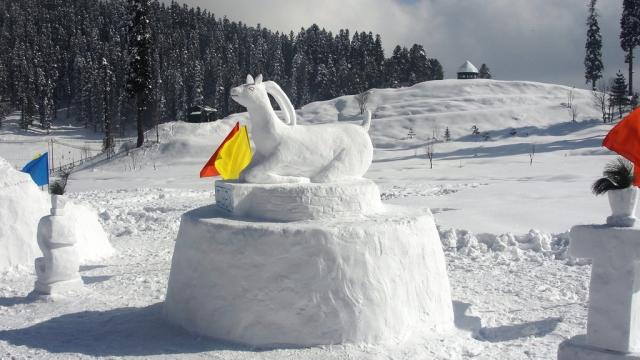 World snow day is celebrated all over the world to motivate personals from non snow areas to attract them to snow areas and promote winter sports. Col J S Dhillon, Principal IISM took a special initiative to celebrate this day in Gulmarg which he described the best ski and winter sports destination in .

The chief guest during celebrations was Farooq Ahmad Shah, Director Tourism, . He said the aim of today’s celebrations is to bring awareness amongs masses about of the various facilities available to tourist in , especially in Gulmarg during winters. All ski trainees of the Institute and army joined hands together to make a wonderful snow pavilion which depicted snow igloos, high mountains of , symbols of various organizations which are associated with winter games including Winter Games Federation of India and India Olympic Association.

In addition to skiing and snowboarding many other fun activities were organized by IISM. Many stalls of souvenirs, handicrafts, snow equipment were made with the help of snow which looked very innovative and impressive. Winners of various events were given prizes by IISM and a dinner party was hosted on behalf of the Deptt.of Tourism.

60 local children under sports council of J&K () took part in the different events of skiing and model making. 70 students of IISM, Gulmarg also took active part in the festival. Festival was attended by more than 3000 persons who appreciated the efforts of Indian Institute of Skiing & Mountaineering and applauded the initiative of FIS to organize such events throughout the world especially in non skiing countries of .