Gun control does nothing to prevent criminals from killing innocent people. It merely inhibits law abiding citizens from defending themselves against the deviant lunatics who randomly and sometimes not so randomly choose their targets. Every state (& city) that imposes strict firearm regulations on its civilian population has insane numbers of murders committed by gun wielding criminals. Chicago has some of the strictest gun laws and the murder rate there has skyrocketed but you don’t hear anything from this administration about it. New York isn’t far behind and what has made it significantly worse there was the repeal of “Stop and Frisk” which prevented a large amount of guns from doing harm by seizing them from unauthorized users who were with malicious intent. California, New Jersey, Maryland, and others keep their populations in real danger because of the ridiculous restrictions that will get you denied for a carry permit. If you cannot defend yourself, you are a target and criminals know it.

It is our 2nd Amendment Constitutional right to protect ourselves. By the time the police have gotten to a situation where a person’s life is threatened and is in real danger, all too often by the time they arrive, its a crime scene with unspeakable carnage. It could have been prevented had the terrorized victim had a firearm to defend themselves. It takes minutes for police to get to a scene after a 911 call is placed. Seconds count and can make the difference between life and death. Criminals don’t care; they have no conscience, no compassion, no value for life. So the only barrier standing between you and your family and an armed robber or killer is the firearm you have in your hand which will save your life and those of your family. Nothing short of that will ensure your survival.

Every mass school shooting has happened in a “Gun Free Zone.” They may as well post a sign that says “open hunting here; we are defenseless.” How stupid to assume that people are safe in an area where firearms aren’t allowed. Really, criminals will abide and respectfully stay away. Ludicrous doesn’t even begin to describe how insane that is; whose brainchild was that anyway? You don’t like guns, fine, then don’t have one. Nobody is forcing you to own one but don’t deny others their right to have them. If there had been armed guards or even armed citizens on those campuses, then very likely the deaths of those innocent kids and students would have been minimized. There are always going to be mentally deranged people in the world but in the face of such grave danger, the best defense is a strong offense. After the Sandy Hook horror, the NRA suggested placing armed, trained guards in the schools so that if a psychopathic predator attempted such a heinous act, they would be taken out before having the chance to carry out their chain of death. The NRA had it right; who else will protect our children? There are armed guards or police in many places so why not in schools where there have been so many attacks; lives will be saved. Wouldn’t you feel more comfortable knowing your children weren’t in harm’s way because there was someone there to protect them? The answer is clear….

So please, ignore the political rhetoric about how we need stricter gun control; that it will keep us safe. To the contrary, all that does is get more people killed by creating a defenseless society of easy targets. But also remember, if you choose to acquire a firearm, you must train. Equally dangerous it is to own a gun and not seriously train on safety and usage. But remember to train with an NRA certified trainer; safety first always as you build proficiency, skill and confidence. My best reference; http://www.armeddynamics.com/ 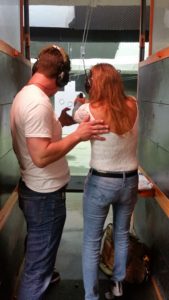 Filed under: Lifestyle, Self-Help
Share Tweet Pin G Plus Email
previous article: The lowest in eleven years, the price of oil may fall further
next article: India Will Remain An Inclusive And Accommodative Society: Rajnath Singh