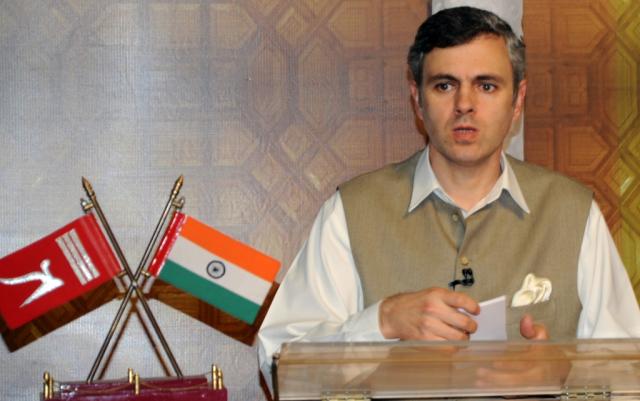 Srinagar, August 14 (Scoop News) – Asserting that gun or economic measures cannot solve the political issues, Chief Minister, Omar Abdullah reiterated the necessity of dialogue to find out ways and means of addressing these issues politically in an atmosphere of peace and amity.

In his Independence Day message to people on Doordarshan and Radio Kashmir, the Chief Minister said that both internal and external dimensions of issue require equal focusing.

The Chief Minister said that he is hopeful that the dialogue process restarted between and will yield results. He expressed confidence that while discussing the major issues, the two countries will devote attention to resolve smaller issues like converting Cross LoC Trade into normal trade from the present Barter status, making visa regime easy, helping implementation of rehabilitation policy for youth, etc. in the upcoming Foreign Ministers’ Conference.

Omar Abdullah also appealed to the leaders (separatists) with different political viewpoints vis-à-vis mainstream political parties to take best advantage of current favourable political scenario and come on table to discuss their viewpoints with the Government of India and contribute in seeking secure and bright future for the State and its people. “When they are ready to talk with one country there should be no reason for them not to talk with other country”, he added.

Listing elimination of violence, addressing unemployment crisis, curbing corruption and resolving the electricity deficiency in the State as four important concerns flagged in the policy planning of his government, the Chief Minister said that there has been visible improvement in peace situation since last over one and the half years.

The Chief Minister said that the graph of violence is decreasing and his government has reduced the presence of security forces. “We have removed various bunkers in and similar action will follow in other places with the improvement of situation and restoration of peace.

Giving full credit to people for the prevailing peace and law and order situation in the State, the Chief Minister said that he is committed to take dividends of peace to every household. He said that his government would continue in the direction of restoring permanent peace in the State. He said that his government wants to create such a conducive atmosphere as would help the return of Hindus, Muslims and Sikhs who have left the Valley during disturbance. He said the peace has helped to carry forward development holistically all across the State. “It has helped to empower people and strengthen the institutions”, he added.

The Chief Minister said that creation of powerful panchayat system in the State is his endeavour and all necessary measures have been taken to empower panchayats. He said that the panchayat system in is being put in place after a period of over 30 years as such, it would take some time to provide strong edifice to this system to flourish and grow. He said 3-tier Panchayat Raj is his commitment and reiterated that urban local body elections will be held by the end of this year.

The Chief Minister cautioned the people of the designs of those who want to disturb peace. He asked them to foil such designs for the larger interest of the State and its people. He said the restoration of tranquillity and carrying forward development process on fast track has been possible by the wholehearted support given by the people to his government in maintaining calm and peace during last about two years.

On employment crisis, the Chief Minister said that he has never tried to hide the facts on this count and deceive youth. “I have told time and again that government would take all steps to absorb educated youth in government departments to the degree possible but the huge unemployment problem cannot be resolved by providing government jobs to youth. We have to look beyond this and find out solution to this crisis”, he said and cited the measures his government has taken to expand employment orbit for youth and help them get meaningful employment in the reputed private sector companies.

The Chief Minster referred to the SKEWPY initiative taken by his government to address unemployment problem in the State and said that thousands of youth have started taking benefit of this initiative. He also talked about the centrally sponsored schemes of Udaan and Himayat launched in the State to upgrade the skills of educated youth and get them placed in various private companies. He expressed gratitude to Union government and Prime Minister for these schemes. He said many youth have availed the grants provided under SKEWPY and many have got jobs in private companies through Udaan and Himayat initiatives.

Describing corruption as an universal phenomenon in the country, the Chief Minister said that his government has strengthened the institutions and enacted laws to curb this evil effectively. He cited the example of revitalizing and reconstituting the J&K State Accountability Commission, implementation of State Right to Information Act, enactment and implementation of Public Service Guarantee Act, introduction of e-tendering and e-procurement in various government departments, putting in place 3rd party monitoring and well framed transfer policy. He said these initiatives have helped a lot to restrict corrupt practices and save public money.

While conveying Ramadan and Eid greetings to the people along with Independence Day congratulations, the Chief Minister referred to the gloom given by the fire that damaging Dargah of Peer-e-Dastageer (RA) at Khaniyar and by the untimely demise of so many Amarnath Ji yatries. However, he expressed satisfaction over the calm exhibited by people and described it as a good omen for peace and prosperity in the State.

On electricity deficiency, the Chief Minister said that his government has flagged this sector as an important area for holistic development. He said while attention is on enhancing generation through various power projects and add about 3000 MWs in next a few years, his government has also focused on unbundling the transmission and distribution system. He said power leakage is highest concern for the State. He said that meeting electricity losses of over Rs. 2000 crores out of the Rs. 7300 Annual Plan 2012-13 sanctioned by the Union Government, is a huge burden to bear.

The Chief Minister appealed the people to pay the electric charges in accordance with its consumption. He said that the unaccounted use of electricity by industrial houses, showroom owners, big businessmen and moneyed people at the cost of State’s development has to go and they have to pay the fee as per they consume the electricity.