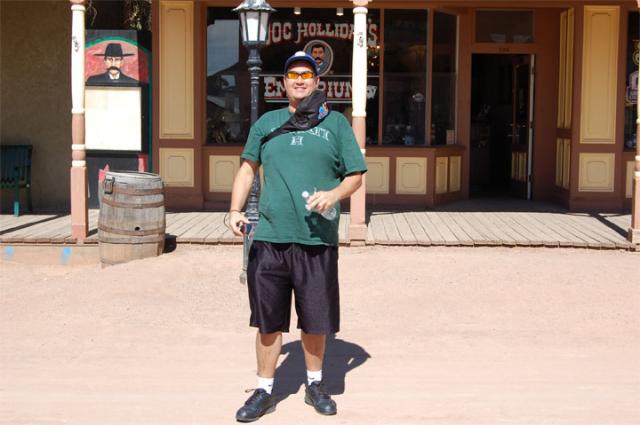 Just after daybreak, we were on our way out of town. We decided to leave the back way on New Mexico Highway 9, a secondary road that parallels the dangerous (according to the media) US and Mexico border from Columbus to Animas, NM.  From Animas it was north to Cotton City where, other than a few speed limit signs and an occasional dog, there’s not a lot to see.  In Benson, AZ, we had lunch with relatives and then headed to Tombstone and our next adventure.

The town is “Old West,” complete with dirt streets, stagecoaches, period dress and…bullet holes.  The proprietors of the businesses are well versed on what caliber pistol made what hole in the saloon’s walls, and when you belly up to a bar, it’s possibly the same one the Earp Brothers and Doc Holiday leaned on 127 years before.  Some wanna-a-be cowboy tourists were dressed in authentic looking period clothes.  One, judging by the clothes he wore, aspired to be to be Buffalo Bill Cody but, because of his diminutive stature, he came up a little short of his goal.  We looked like the other dude tourists: cameras hanging around our necks, baseball caps, running shoes, with pants and shirts made in China and bought at our local big box store.

It was 1:15 and after some deliberation, we decided on a rendezvous time of 4:00.  Collectively, we surveyed the street ahead and, stepping up on the boardwalk, we went our separate ways.  Left to fend for myself, I leaned against a false front building with my back against the wall.  I checked to make sure I was prepared for what might happen next.  I felt ready; my camera battery was charged and the memory card was empty.  I stepped off the boardwalk into the street, steely eyed, right hand ready for a quick draw and my index finger on the shutter button.  Thoughts of Gary Cooper and “High Noon” flashed through my mind.  Thoughts like…”Would there be anything I could make into an article without repeating what others had done many times before me?’  Or, ‘Would I die that day, a literary unknown?”  Only time would tell.  Since no Bull Durham tobacco pouch or rolling papers filled my shirt pocket, while keeping a wary eye out, I reached into my camera bag, pulled out a few business cards and slipped them loosely into the empty pocket for a quick draw.

Reading other’s body language is an art that gun fighters, photographers and freelance writers have to instinctively know.  It allows you to pick the right time, place and people to talk to.  By being observant, you can get lots of useful, survival information.  Information that can be the difference between life, as a photojournalist, or death, as a greeter at Wal-Mart.  .

The gunfight at the OK Corral took place in Tombstone and, when the re-enactors were walking around town to advertise their next show, I took a few pictures and passed out my business cards, which got me two free tickets to the next performance and it was worth it, even if I’d had to pay.  But, I’m getting ahead of myself.

Most people, including myself before the performance, don’t know the background circumstances about why the gunfight took place.  Before talking with the reenactors, I’d walked into a saloon only moments before one of the incidences, a fist fight between Ike Clanton and one of the Earps, broke out.  Actually, the gun fight had been festering for some time and the fight in the saloon was only one of the events that brought it to a head.  Fortunately for me, it wasn’t 1882 and I wasn’t one of the participants.  When the fight broke out, I wasn’t prepared for what took place.  I was changing from the telephoto to regular lens and didn’t get the lenses swapped until the episode was over.

A few minutes later, I met up with Virgil, Wyatt and Doc Holiday.  While the four of us were talking in the dusty street, our son stepped out of the shadows and onto the boardwalk.  I walked quickly over, pointed to the three men standing in the dusty street and whispered,  “Would you like to have your picture taken with them?”   If one looks closely at the picture, it’s in the “Gunfight In Arizona” slide show on Associated Content with a link on our website www.newliferoadmap.com, you can tell which one’s our son.  He’s the one with the Shaka hand, Hawaii T-shirt and a tan.

The reenactment answered a lot of questions about that day etched in Old West history. Before the actual gun fight took place we, the audience, were filled in on a lot of facts, details and background about what happened there in 1882.   There are two reenactments in town, the one I went to was at the OK corral.

It almost 5:00 by the time the performance was over.  Stepping back into the present, we walked quickly back to the car. We’d planned to make another stop on our return to Benson, but our son had to catch a plane to Kauai, and airplane flights wait for no man.

Filed under: Lifestyle, US
Share Tweet Pin G Plus Email
previous article: The Beauty Around Us…Changing Our Lives Part 1
next article: Fare Rollback Effects not Felt by Millions of Unemployed, NGOs to the Rescue