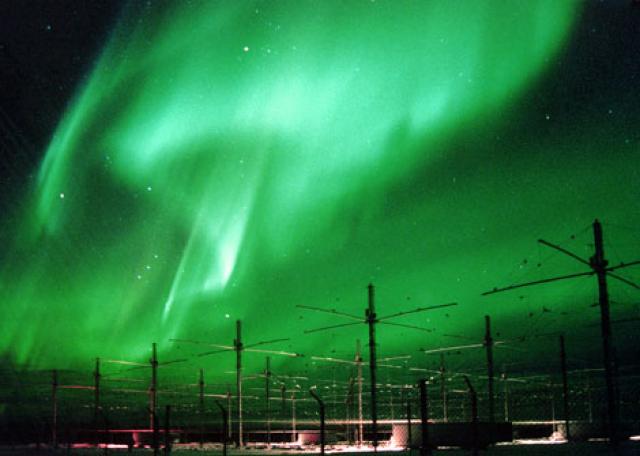 HAARP is an acronym for the High Frequency Active Auroral Research Program which is an ionospheric research program.  It is  jointly funded by the US Air Force, the US Navy, the University of Alaska and the Defense Advanced Research Projects Agency (DARPA).

Its purpose is to analyze the ionosphere and investigate the potential for developing ionospheric enhancement technology for radio communications and surveillance purposes.

Peake  told BBC radio host Billy Butler that he became interested in HAARP when he recently awakened in the middle of the night to what sounded like "morse code" signals in his ears.

He was later referred to the HAARP program,  which Icke  has written on extensively,  theorizing that it is used for mind control,  and to disrupt the earth’s magnetic field.

Icke asserts that the program has been the cause of recent massive earthquakes,  and that the Haitian earthquake of  2010 was " a test".

Some believe HAARP is a smokescreen for the US Defense Department’s resurrection of Reagen’s Star Wars missile defense program.

Icke  is an English writer and public speaker best known for his views on the "matrix"  like quality of the phenomenal world.   Some see Icke as one of  the most controversial speakers in the world.  He has authored 18 books, including "The Biggest Secret"  in 1999 followed by "Children of the Matrix"  in 2001.

Formerly a well-known BBC television sports presenter and spokesman for the Green Party,  Icke became interested in a kind of conspiracy theory perspective of life with a basis in the Illuminati,  psychology and science.

Anthony Peake is author of "Is There Life After Death?  : The Extraordinary Science of What Happens When We Die"  ( Chartwell Books, 2006),  "The Daemon:  A Guide to Your Extraordinary Secret Self" (Arcturus Publishing, 2008),  as well as a pending book on the history out out of body experience,  and a textbook in which he acts as editor.

Peake  has theorized a second , secret self contained within human consciousness which guides the individual in life, and contains a shocking secret at death.  This second self he coins "the Daemon",  and   –  drawing on the implicate order of scientist David Bohm  –  asserts that it allows us to replay our lives in an I-MAX type theater of the mind.