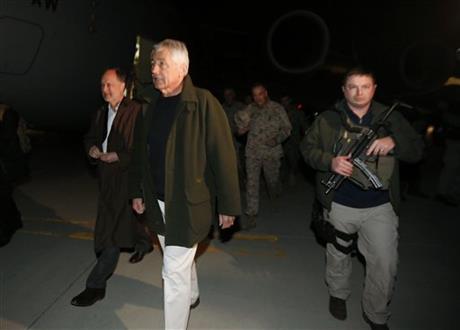 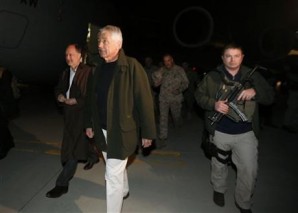 Secretary of Defense Hagel in Afghanistan flanked by private security contractor carrying a Mp5 machine gun used by special forces around the world, including the SAS in Britain (note: with dual magazine tapped together for rapid reload).

In a rather interesting article by Karen Parrish a reporter for American Forces Press Service, Secretary of Defense Hagel commented briefly on the situation in Afghanistan with President Karzai refusing to  sign a bi lateral security agreement with the U.S. until “after” next year’s presidential election.

Hagel said NATO allies and other nations contributing to the International Security Assistance Force in Afghanistan are also waiting for the U.S.-Afghan agreement, which is expected to serve as a model for a similar, NATO-Afghanistan security agreement.

“We continue to plan for a post-2014, train, assist and advise [and] counterterrorism role,” the secretary said. “But until we get that BSA, we can‘t do any more than train. It really needs to be done by the end of this year”, he said.

Hagel responded to a reporter’s question on whether an extended delay in signing the document would be a “deal-breaker.”

“I don’t make deal-breaker decision,” he said. “But I think it would put the United States in a very, very difficult position — because until we have a signed bilateral security agreement, … [we don’t have] the assurance that we need to go forward.”

U.S. forces must be assured of protection, Hagel said, calling that security a “critical element.”

“We have to have assurances that our forces would be protected in every way,” he said. “Without a bilateral security agreement, I don’t think we could go forward”, said Hagel (source: Hagel urges signing of US – Afghan Agreement by years end http://www.defense.gov/news/newsarticle.aspx?id=121207