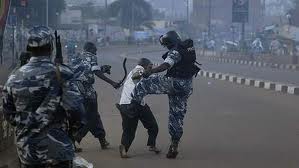 Ugandan police brutally kick and beat an unarmed protester during a peaceful demonstration against political oppression in that country.

“Secretary of Defense Chuck Hagel welcomed Ugandan President Yoweri Museveni to the Pentagon. They were joined by Deputy Secretary of Defense Ashton Carter and Ugandan Defense Minister Crispus Kiyonga. The group discussed a wide range of regional security issues, including the recent terrorist attacks in Kenya.

Secretary Hagel thanked President Museveni for Uganda’s leadership in the region and its commitment to the African Union Mission in Somalia, known as AMISOM. The secretary praised Ugandan forces for their efforts to defeat al-Shabaab, for which Congress recently approved more than $14 million in additional Section 1206 support. Secretary Hagel also praised Ugandan security forces for their efforts against the Lord’s Resistance Army and its leader, Joseph Kony. Approximately 100 U.S. personnel are currently deployed in Central Africa, where they are advising and assisting the Ugandan army in this effort. Secretary Hagel welcomed the progress that the Ugandan and other partner forces have achieved in reducing the threat posed by the LRA and expressed his hope that the mission would result in the elimination of the LRA threat to civilians and regional stability.” (source: DOD http://www.defense.gov/releases/release.aspx?releaseid=16287).

Secretary Hagel concluded the meeting by expressing his “appreciation for the close relationship enjoyed by Uganda and the United States.”

It should be noted that Uganda has an atrocious human rights record. The government has been accused of various horrific crimes, including killing unarmed protesters and routinely harasses and intimidated journalists and civil society activists (See website: http://www.hrw.org/africa/uganda).