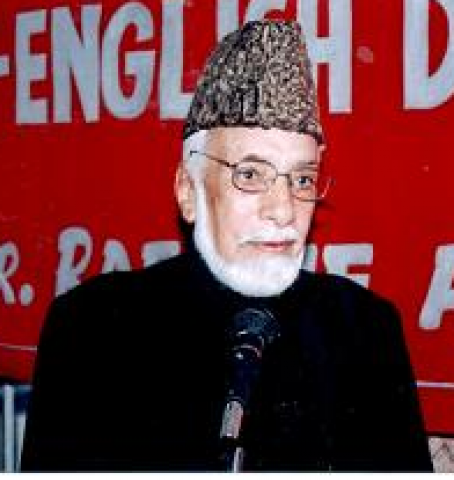 To commemorate the sixth death anniversary of Haji Buland Khan, the veteran Gujjar leader and former Vice Chairman of J&K Gujjar Bakerwal Advisory Board, a largely attended function was organized by the Jammu Kashmir Tribal United Forum (TUF) which was presided over by its Chief, Roshan Din Choudhary. Paying rich tributes to Haji Buland Khan, the speakers recalled his services & sacrifices and termed him a great visionary and a dynamic personality who fought from front for the legitimate of rights of Gujjar community. They said he was a man of very high qualities having great tolerance. According to them, Haji Buland Khan was a strong administrator with innate ability to unite the masses and leading them to struggle for their constitutional rights. He was revered and regarded personality of respect in every community and though he was a resident of District Reasi but  had his influence over almost all the areas of the Jammu and Kashmir State, the speakers added.
While paying tribute to Haji Buland Khan, Roshan Din Choudhary, President of TUF said that he was a legendary reformer, who struggled hard for the socio-economic development and the educational development of deprived sections was his cherished dream. He further said that for bringing revolution in the Gujjar and Bakerwal community, there is dire need to work on the policies and ideology of late Haji Buland Khan.

Speaking on the occasion, Dr. Zabeer Ahmed Bajjar, General Secretary of TUF, said that Haji Buland Khan, the icon of gujjar community, will be remembered throughout for his lifetime struggle for the upliftment of poor & downtrodden people in general and Gujjar & Bakerwal community in particular.

Bajjar further mentioned, “His dedication and affection towards his community members  is seen from the fact that at last stage of his life, despite of his bad health, he used to meet with the delegations of the people and held negotiations with the leaders of national repute.”  Before his death, he participated in the Round Table Conference (RTC) convened by the Prime Minister of India Dr. Manmohan Singh at New Delhi. He discussed various matters of immense importance with Chairperson UPA, Mrs Sonia Gandhi as well, he added.

It may be mentioned here that Haji Buland passed away on June 6, 2007. Born in 1933, he belonged to the remote village of Thuroo, District Reasi. He was associated with National Conference since a long time. He was also a part of Plebiscite Movement led by NC founder, Sheikh Mohammad Abdullah. During 1965, he was jailed along with Sheikh Mohammad Abdullah. Considering his dedication and efforts, he was made President of National Conference, Jammu Province in 1972.

He represented his community in state legislative assembly and council as well. He was associated with Gujjar and Bakerwal Advisory Board for more than a decade and as Vice Chairman of the said board. Many important decisions were also taken during his tenure which include rehabilitation of Gujjar and Bakerwal’s educational and economic prosperity and establishment of new Gujjar hostels for nomadic students.

This commemorative programme was concluded with the Special prayers (Fateh Khwani) performed for the departed soul.