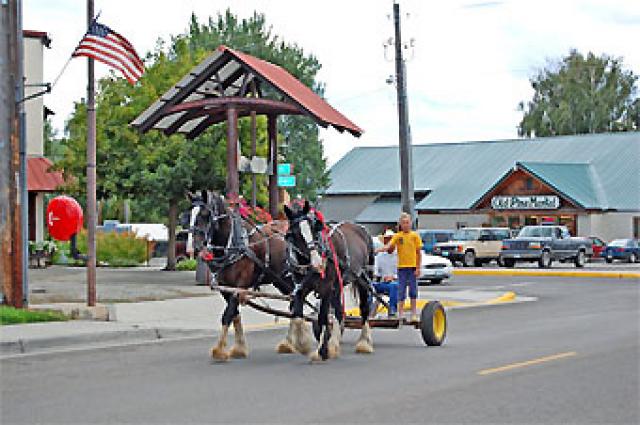 Halfway to Cove and back to Turner.

We spent a few days visisting friends in Halfway and then it was off to the next WWOOF farm.  We were scheduled to be in Cove, Oregon around 7:00 pm on Thursday August 21.  Celinda had called the lady various times to be sure our times and schedules would work for her and if her schedule would work for us.  Our schedule had changed so many times, Celinda wanted to be sure everything would work for all of us.  We believe if it doesn’t work for everyone, it doesn’t work for anyone.  Before we left, we visited with our friend Louise then packed the car and left sometime in mid-afternoon.

The drive from Halfway to the freeway wasn’t as much fun as it usually was, we hated to leave our friends and a place that’s close to our hearts.  Once on the freeway, it was the freeway, boring the same as all freeways.  As time has passed, most drivers have accepted that gas will be $4.00 or more per gallon and have continued to drive the same as they did when it was $2.00.  The same thing happened when gas went from $.50 to a dollar in the 1970’s.  There are lots of people who still complain about the price of gas but not many will do anything about it: a flashback to the 70’s.

Once we got to Cove, we checked in at the farm, unloaded our gear and began a scenario that would continue until we left, which was early the next day.

We had barely arrived when the lady began to tell us that she wanted to go to an art festival in La Grande the next day and that it was going to be hot over the weekend and she wanted to go to the mountains where it was cooler.  When we asked her what she wanted us to do in the garden we got mixed directions.  The easiest way to sum up my experience is to say I had a definite personality conflict with the lady.  I got mixed signals about what to do, what to do first, what was most important and whether she wanted to do something or not.  I felt like I was the ball in a Ping-Pong match and she was a helicopter mom.  Once in the garden things got worse.

When we’d arrived, I began getting bad vibes but thought it was because I was tired from running four miles before we left, visiting, all the other things we did before we left and then driving for three hours.  That evening one of her sons showed up, we had a nice dinner, everyone was mellow and I wrote my feelings off. The next day the directions got even more confusing and my intuition proved correct.

The first evening she’d asked if I could fix the lawn mower, I said I would look at it and see.  The next day she didn’t seem sure which one was the one she wanted to fix.  One of them had the spark plug removed and I asked if that was the one.  She said she thought it was but that she had to get another spark plug before I could fix it.  I didn’t need a spark plug to check for spark and told her I could find the problem without it.  She told me she didn’t know what was wrong with the mower, didn’t know how to fix it and then began to tell me I should do to make it run.  She wanted it fixed, then didn’t and after fifteen or twenty minutes of trying to figure out what I was supposed to be doing, I told Celinda I was going to pack the car because we were leaving.  We were driving back toward Baker City by 10:00, after leaving twenty dollars for the room and board.  I was glad we left and so was Celinda.

We talked about the experience and decided it was a good lesson in listening to your inner voice.  Celinda had gotten hints when talking to the lady on the phone but hadn’t acted on them or voiced them to me.  The lady was a nice person, but didn’t know what she wanted to do, was completely at a loss when it came to telling others what was needed.

We drove back to Baker, and on the way talked about what we wanted to do next.  Our plans had changed again.  First we thought we’d stay at the motel where we had before, look at some property in the Baker area and then go back to Halfway the next morning.  The motel was full, there was a parade that weekend and the local fair started that night.  We’d done everything we wanted to do and had seen everything we wanted to see in Halfway and Baker.  Celinda asked me what I wanted to do and I said, “ Let’s go check out places around Turner and then go south to Oakridge and Westfir.”  In true chipmunk fashion, we made a 180 turn and headed west.  Eight hours later, a phone call to Celinda’s cousin, 43 mpg over three mountain passes with an overloaded car, a stop in Sisters, Oregon and a fun drive on a crooked road to Turner, we once again unloaded the car and packed our gear down the steps to the guest room.

We’re fortunate to have really good friends and relatives, ones who can still love us, even when we’re so unpredictable.

The next day I burnt off the blahs with a good 3-1/2 mile run, did some Internet research on property in the area, caught up on e-mails to friends, took care of my Internet business and went for a couple mile walk with Celinda, up the down the hills in Turner.

A slide show can be accessed by going to www.newliferoadmap.com select Larry’s slide shows from the sidbar menu and follow directions on the landing page.