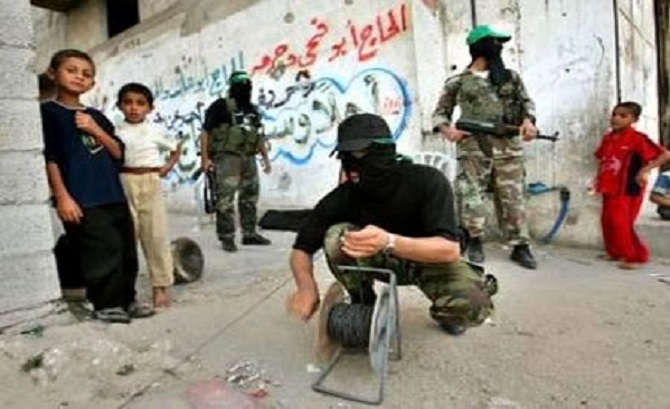 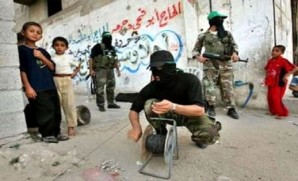 Children being used as human shields in Gaza.

On December 9, 2014 Senator Brian SCHATZ of Hawaii rose to ask that the Senate proceed to the immediate consideration of No. 616, H. Con. Res. 107 – denouncing the use of human shields by terrorists:

“Mr. President, I ask unanimous consent that the Senate proceed to the immediate consideration of Calendar No. 616, H. Con. Res. 107.

The PRESIDING OFFICER. The clerk will report the concurrent resolution by title.

The legislative clerk read as follows:

A concurrent resolution (H. Con. Res. 107) denouncing the use of civilians as human shields by Hamas and other terrorist organizations in violation of international humanitarian law.

(Strike out all after the resolving clause and insert the part printed in italic.)

(Strike the preamble and insert the part printed in italic.)

Whereas the use of human shields is unconscionable and morally unacceptable;

Whereas since June 15, 2014, there have been over 2,000 rockets fired by Hamas and other terrorist organizations from Gaza into Israel;

Whereas Hamas uses civilian populations as human shields by placing their missile batteries in densely populated areas and near schools, hospitals, and mosques;

Whereas Israel dropped leaflets, made announcements, placed phone calls, and sent text messages to the Palestinian people in Gaza warning them in advance that an attack was imminent, and went to extraordinary lengths to target only terrorist actors and to minimize collateral damage;

Whereas Hamas urged the residents of Gaza to ignore the Israeli warnings and to remain in their houses and encouraged Palestinians to gather on the roofs of their homes to act as human shields;

Whereas on July 23, 2014, the 46-Member UN Human Rights Council passed a resolution to form a commission of inquiry over Israel’s operations in Gaza that completely fails to condemn Hamas for its indiscriminate rocket attacks and its unconscionable use of human shields, with the United States being the lone dissenting vote;

Whereas public reports have cited the role of Iran and Syria in providing material support and training to Hamas and other terrorist groups carrying out rocket and mortar attacks from Gaza;

Whereas throughout the summer of 2006 conflict between the State of Israel and the terrorist organization Hezbollah, Hezbollah forces utilized innocent civilians as human shields;

Whereas al Qaeda, Al-Shabaab, Islamic State of Iraq and the Levant (ISIL), and other foreign terrorist organizations typically use innocent civilians as human shields;

Whereas the United States and Israel have cooperated on missile defense projects, including Iron Dome, David’s Sling, and the Arrow Anti-Missile System, projects designed to thwart a diverse range of threats, including short-range missiles and rockets fired by non-state actors, such as Hamas;

Whereas the United States provided $460,000,000 in fiscal year 2014 for Iron Dome research, development, and production;

Whereas, during the most recent rocket attacks from Gaza, Iron Dome successfully intercepted dozens of rockets that were launched against Israeli population centers; and

Whereas 5,000,000 Israelis are currently living under the threat of rocket attacks from Gaza: Now, therefore, be it

Resolved by the House of Representatives (the Senate concurring),

(1) strongly condemns the use of innocent civilians as human shields;

(2) calls on the international community to recognize and condemn Hamas’ use of human shields;

(3) places responsibility for the rocket attacks against Israel on Hamas and other terrorist organizations, such as Palestine Islamic Jihad;

(4) supports the sovereign right of the Government of Israel to defend its territory and its citizens from Hamas’ rocket attacks, kidnapping attempts, and the use of tunnels and other means to carry out attacks against Israel;

(5) expresses condolences to the families of the innocent victims on both sides of the conflict;

(6) supports Palestinian civilians who reject Hamas and all forms of terrorism and violence, desiring to live in peace with their Israeli neighbors;

(7) supports efforts to demilitarize the Gaza Strip, removing Hamas’s means to target Israel, including its use of tunnels, rockets, and other means; and

The committee-reported amendment in the nature of a substitute was agreed to.

The committee-reported amendment to the preamble in the nature of a substitute was agreed to.

The preamble, as amended, was agreed to.

The committee-reported amendment to the title was agreed to, as follows:

Amend the title so as to read: “A concurrent resolution denouncing the use of civilians as human shields by Hamas and other terrorist organizations.”

Filed under: News, Terrorism
Share Tweet Pin G Plus Email
previous article: “I have consistently opposed the repugnance, legality and efficacy of torture”, says Senator Mikulski
next article: “The President believes that the Agency’s former detention and interrogation program was inconsistent with our values as a Nation”, says Neil Eggleston