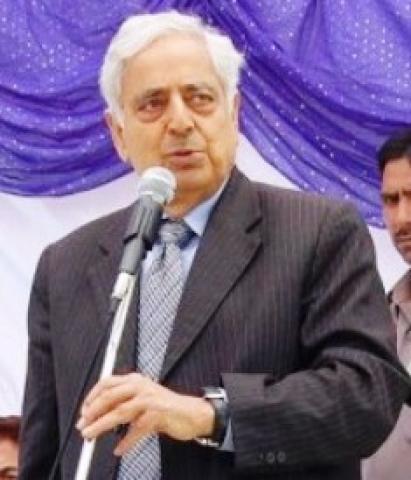 , November 28 (Scoop News) –  Former Chief Minister and patron of the Peoples Democratic Party (PDP) Mufti Mohammad Sayeed today demanded that case regarding mysterious killing of NC worker Sayeed Yosuf Shah should be handed over to an independent investigative agency to ensure impartial investigation in this sensational incident which has put credibility of the state government on the stake.

Addressing meeting of the executive committee members of province of party, Mr Sayeed said that present regime has already lost faith of the people due to the mis-governance as well as due to prevailing trust deficit but credibility of the state government is at lowest ebb after the mysterious killing of Sayeed Yosuf Shah. He said that this incident has exposed how corruption has been deep-rooted in the government as well as in the ruling party. “If leaders of this party are taking money from its own workers to make them MLCs, one can imagine how leaders of NC treat common masses?”, he said.

Quoting media reports, Mr Sayeed narrated the whole episode how Sayeed Yosuf was killed under mysterious circumstances. While comparing that incident with some episodes of  Khap Panchayats, Mufti posed questions “Under what law the Chief Minister had ordered arrest of the deceased. Was Chief  Minister competent to order arrest of the deceased? Under what law the Inspector General (IG) Crime had arrested and detained deceased Sayeed Yosuf?”.

While pointing towards transferring of whole personal staff of the Chief Minister with one stroke, Mr Sayeed observed that evidences were already fudged in this sensational case. “I don’t know what evidences Justice Bedi would  look in this case?”, he said.

Strongly demanding handing over this case to an independent investigation agency, he quoted the famous English phrase “Caesar’s wife must be above suspicion”, adding, needle of suspicion is towards those who are at the helm of the affairs and their credibility is at stake.

Mufti also expressed his anguish over double standard being adopted by the civil society of the country as well as Centre government on this issue. “Social activists like Anna Hazare have launched campaign against corruption in the country but they have maintained a silence over glaring example of political corruption in the state”, he said while pointing towards Sayeed Yosuf’s mysterious killing and regretted that such double standard has been creating anger among people of the State.

Taking a dig at NC led regime for its failure to connect with the people, he said that this government has created trust deficit which ultimately led to increasing alienation among common masses. “People of the state don’t have faith on this government because except promises the ruling coalition has done nothing”, he said while pointing towards promises made by Chief Minister to constitute Truth and Reconciliation Commission and his much publicized announcement of the rehabilitation policy for youth who want to return from across the LoC. He added all announcements made by this government during the last three years remained only on papers. “The recent controversy raked up the Chief Minister on AFSPA is nothing but a gimmick to divert attention of the people from his mis-governance, mal-administration and his utter failure of address grievances of the people”, he maintained and called upon all right thinking people to expose mis-governance of this regime.

Highlighting achievements of PDP-Congress regime in the state, Mufti said that with the strength just 16 members in the Assembly, PDP had not only changed political discourse of the state of but also changed history of this sub-continent through its conviction. He further added that PDP has scripted

a new chapter of peace and development in  the sub-continent.

“Although we had just 16 members in the Assembly, our party had convinced successive governments at Delhi to take some bold Confidence Building Measures (CBMs) to restore lasting peace in this region”, he said and recalled that PDP had entered into alliance with Congress by formulating a Common Minimum Programme (CMP) in which wishes of all people were incorporated and pro-peace agenda was given first priority.

Mr Sayeed said that PDP-Congress regime had not only restored peace in the state but also created conducive atmosphere for accelerating developmental activities in the State. “All regions and sub-regions were given equal treatment during that period”, he said and added that a path of equitable development was carved out at that time.

Reiterating his commitment to aggressively pursue the pro-peace agenda, Mufti said that his aim is to make Jammu and Kashmir as an island of peace and a bridge between India and Pakistan to establish lasting peace in this region.

Earlier after beginning of the meeting, a two minutes silence was observed in the memory of party leader Rehmatullah Malik, who lost his life in road accident some days back.