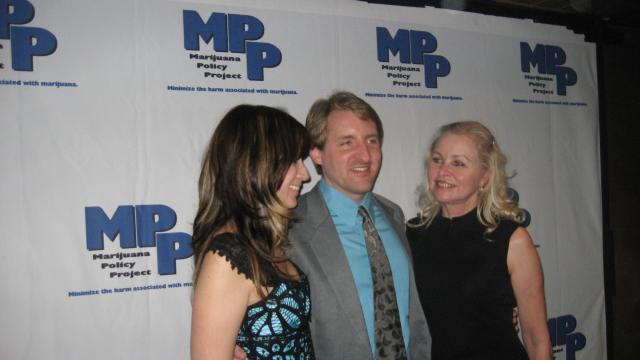 Medical marijuana reform rocked Manhattan’s Highline Ballroom on May 14th, 2008 when the Marijuana Policy Project www.mpp.org held a benefit party  there at $250 a ticket to honor freedom fighters and present a celebrity-studded list of speakers.  The Libertarian Party of New York www.ny.lp.org with its Hardfire www.hardfire.net TV show to cover the event.  Gary Popkin produced and recorded the goings on, while I interviewed the speakers.  The show is available on Google Video

I interviewed fellow libertarians and others.  Libertarians include both small "l" and capital "L" Libertarian Party members.  Rob Kampia, executive director of the Marijuana Policy Project, which is a non-partisan organization expressed confidence in the MPP’s legislative campaign.  Kurt Loder, the MTV News anchor identified himself as a libertarian and supported full legalization of marijuana, not just medical marijuana.   Economist Murray Sabrin is running for New Jersey’s Republican US Senate nomination on June 3rd and confined himself to the state’s rights to regulate marijuana efforts. He thinks it acceptable for states to regulate marijuana even when they abridge individual liberty.  He has been endorsed by Dr. Ron Paul, a medical marijuana supporter also, and has been referring to himself as a conservative. He was the Libertarian Party’s candidate for governor of New Jersey previously.  www.murraysabrin.com.

John Stossel, a prominent libertarian in the media, gave a great speech but unfortunately left without being interviewed by Hardfire.

Talk show host Montel Williams, medical marijuana patient Joel Peacock, singer Michelle Phillips of the Mamas and the Papas fame spoke and were interviewed by Hardfire.    Entertainment was provided by comedian Steve Marshall and singer Nicole Atkins with her band the Sea.   The food and drink were good, the crowd well-dressed and attractive, the music good and a generally fun event. The event had professional work done by Gail Parenteau of Parenteau Guidance.  I hope that future Libertarian Party www.lp.org events are as amusing.    -30-

(About the author: Richard Cooper is the export/import manager of a Long Island, New York manufacturing firm.  He ran as a Ron Paul delegate and is the former chair of the Libertarian Party of New York www.ny.lp.org).

For a humorous take on the War on Some Drugs, see my article