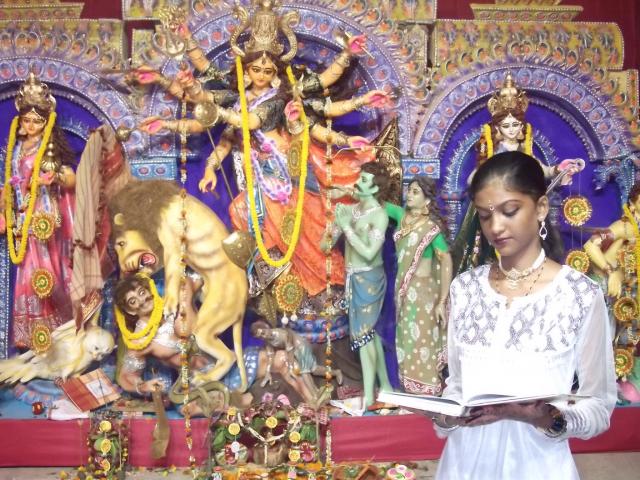 The festival has witnessed the tradition expressing of the communal harmony wherein the Muslims took part in the festival along with the Hindus. A Muslim girl Mofisa Hussein chanting slokas infront of the deity infront of the deity (Baguaity Community Puja).Pic: Santanu Debnath(pc1).Durga Puja, one of the largest festivals in the World.Lively crowd of pandel hoppers visiting one pandel to another mostly on foot.
Pic: Santanu Debnath (Pc 2 ). The festival of light.Pic: Arun Lodh(pc3). Today (Oct 6) the famous Autumn festival of Bengal comes to an end with the immersion of the idols of Goddess Durga in the river Ganges or nearby lakes or ponds.Some flavour of Durga Puja.It begins after prists complete the ritual to end the puja.During sindur khela (Vermillion game), they greet each other after offering prayer to the Goddess.After the immersion, younger ones touch the feet of elder ones to pay their respect and offer sweets.The West Bengal Pollution Control Board, Calcutta Police as well as Calcutta Municipal Corporation provide some guidelines on removal of idol structures that pollution Control Board had issued a couple of years ago. (Pc 3-4)