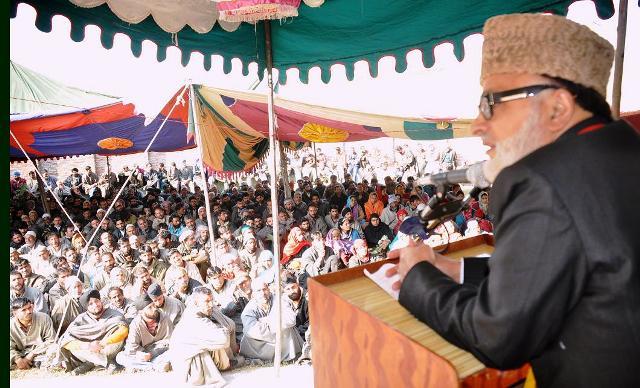 , November 28 (Scoop News) – While asking the people to desist from Hartals, Minister for Rural Development, Law and Parliamentary Affairs,  Ali Mohammad Sagar has said that the tendency does nothing but has destroyed the economy of the valley to such an extent which would take decades to recover the economic losses.

Reactivating the importance of dialogue in solving various vexed issues,  Sagar said that the persons who believed in cult of violence have also understood this fact. He said that violence has not solved any issue and it is to the medium of talking with each other that various issues have been solved globally and history stands testimony to the fact.

The Minister said that those parties who are forcing people to observe hartal are in fact the real enemies of them as by virtue of resorting to unprecedented facts the tourism, educational and other related sectors have suffered colossal losses which would take decades to recover. He said that the people have to distinguish between their enemies and well wishers taking into account these parameters.

The Minister said that the government led by Chief Minister, Omar Abdullah is for the all round and sustained development of the state but unfortunately some forces are trying to subvert the developmental agenda for their petty political consideration causing miseries and hardships to the people.

The Minister and MLA Tral jointly distributed Rs 89.24 lakh among 512 IAY beneficiaries of Tral and Pampore blocks of the district Pulwama.

MLA Tral, while praising the government led by  Omar Abdullah for its all round developmental activities, said that the people should also understand this fact and come forward and helps government in its endeavour.