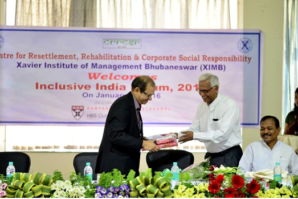 The objective of the forum was to identify meaningful ways for corporate India to partner with NGOs in their specific areas of focus, primarily – education, employability and healthcare. Participants in the forum include members of the HBS Club of India many of whom are CEOs or a part of the leadership team of their respective companies, domain experts and leaders from several leading and reputed NGOs in India, CSR representatives from the corporate world and students of XIMB, Xavier University.

The Forum was facilitated by CRRCSR (Centre for Resettlement & Rehabilitation and Corporate Social Responsibility) which reflects XIMB’s efforts to blend business and development, and foster inclusive growth. It has also consulted leading corporations in Odisha on R&R and CSR issues.

At XIMB Initiatives are undertaken round the year by students in association with corporate stake holders to create awareness or promote social causes and issues affecting lives at large.

Earlier, Prof. Dr. Fr. Paul Fernandes S.J., Vice-Chancellor & Director, said, “XIMB has its roots embedded into tradition, through the inculcation of a value system that nurtures its students into hardcore professionals and most importantly, responsible citizens.” 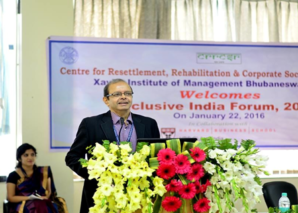 The CSR regulations and mandated CSR activities have now opened more gates for similar projects with shared responsibilities between corporate, NGOs and other stake holders to bring in large scale changes in the society.

Known for its academic excellence and quality research work, XIMB is considered as one of the top 3 B-Schools in Eastern India, along with IIM Calcutta & XLRI Jamshedpur and has consistently been ranked as one of the best management institutes of India, ranked between 2 and 13 by all B-School ranking surveys of the country.