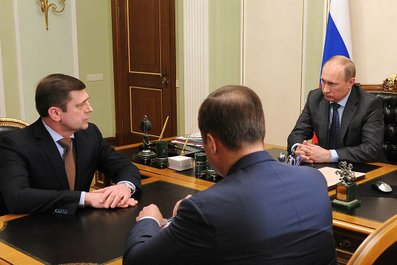 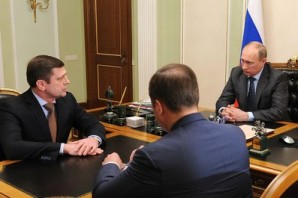 “In addition to our work with CIS nations, we also held a meeting with NASA Administrator Charles Bolden here in Moscow, where we discussed prospects for joint projects”, said Oleg Ostapenko, the new head of the Federal Space agency in Russia. A fact that NASA didn’t wish to admit publicly for what ever reason last week when we called to inquire about that rumor – now confirmed! Ostapenko is picture to the left of President Putin (Photo courtesy of the Kremlin press office for  President of Russian Federation Vladimir Putin).

On January 10 2014 Russian President Vladmir Putin appointed Oleg Ostapenko to head the Federal Space Agency in Moscow. Ostapenko was a former Colonel in the Aerospace Defense Force  and former Russian Minister of Defense, according to private intelligence sources.

During his meeting with President Putin afterward his appointment – he express thanks for being appointed to head the space agency- Russia’s equivalent to the American NASA space program. He also confirmed the fact that he had met with representatives of NASA regarding joint space projects – a fact we were previously unable to confirm earlier in the week through NASA’s press office for some strange reason?

His comments are as follows:

“Mr President, first of all, allow me to express my enormous gratitude to you for the trust that you have placed in us by appointing us to these posts: me as head of the agency and Mr Komarov as the deputy head. Let me assure you that we will carry out all the objectives assigned to us with honour and will do everything to ensure that Russia increases its existing potential and opportunities, and holds an independent position in the world.

As far as last year’s performance is concerned, it was indeed a very active year. A great deal was done in launching spacecraft: we launched 26 spacecraft in the state’s interest and carried out a large volume of work on the Vostochny Cosmodrome. First and foremost, we were able to shift, strengthen and direct momentum in the development of this effort in a positive direction. Since August, we have reduced schedule delays by two to two-and-a-half months. This gives us good prospects for fulfilling the objectives we have set.

As for the Plesetsk Cosmodrome, meaning the construction of the Angara space centre, we have already reached the practical stage and are completing installation of the technological equipment. We have mounted a light rocket (model) at the launch pad. All the issues pertaining to adapting this rocket to the launch pad have been resolved. Now we are entering the final phase of this work.

We did not stop working during the holidays. People were at the space centre and briefed me daily on the progress and volume of work performed.

In addition, we have done a great deal of work at an international level. Substantial efforts have been carried out with Kazakhstan, pertaining to the Baikonur Cosmodrome and other areas of activity. A great deal has been done with Belarus: we are engaging in joint projects there with several companies to address challenges of mutual interest. We have also expanded our collaboration with Ukraine.

In addition to our work with CIS nations, we also held a meeting with NASA Administrator Charles Bolden here in Moscow, where we discussed prospects for joint projects. There was a meeting with the French minister in charge of the space sector, and we also outlined some cooperation opportunities. So this activity has not stopped, and we have intensified it as much as possible recently.

At the end of the year, much work was done on the launch programme. We conducted a series of spacecraft launches from Baikonur. We launched the Express communications satellite and three communications units using the Rokot launch vehicle from Plesetsk, and worked out military issues at Plesetsk. Also, on December 28, we launched the Soyuz-2.1v light rocket. This had fundamental importance; it had been postponed since 2012, and it was not easy for us now. But the rocket overall and its entire complex performed perfectly, and we can now state that we have this rocket and we can continue efforts in this area.

Thus, however difficult the year may have been, we nevertheless essentially met all the challenges. Granted, we did not make several planned launches and postponed them until 2014 for technical reasons: they are included in the program, and we will do everything to complete them in 2014″, said Oleg Ostapenko,  new head of the Federal Space Agency in Russia (source: Kremlin http://eng.kremlin.ru/news/6505).

Oleg Nikolayevich Ostapenko (Russian: Олег Николаевич Остапенко) (born 3 May 1957) is a Colonel General in the Russian Military, Deputy Minister of Defense, and former commander of the Aerospace Defense Forces, a position he held from their foundation on 1 December 2011 until his promotion in November 2012. Prior to this he was commander of the Russian Space Forces from 2008, replacing Vladimir Popovkin (source: http://eng.mil.ru/en/structure/forces/cosmic/management.htm).

In 1979—1989, he served in various command and staff capacities in the Strategic Missile Forces (SMF).

In 2002–2004 — the Chief of Headquarters / First Deputy Chief of the Main Trial Centre for Testing and Control of Space Means.

From November 2011 — the Commander of the Aerospace Defence Forces.

By the RF Presidential Decree of 9 November 2012 he has been appointed the Deputy Minister of Defence of the Russian Federation.

Personal decorations: the Order of Military Merit, the Medal of Combat Merit and other decorations.