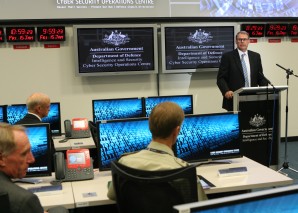 Australia’s electronic spy agency reportedly has access to a top secret program that has successfully cracked the encryption used by hundreds of millions of people to protect the privacy of their emails, including those of top level diplomats and statesmen.

US National Security Agency director of technology Lonny Anderson was in Australia a week ago for secret meetings with key officials from ASIO, ASIS and the Australian Signals Directorate.

Intelligence officials confirmed Mr Anderson had held briefings with key Australian agencies but refused to discuss the nature of the meetings. Speculation concerns the possibility of leaks was discussed. Anderson has been responsible for tightening security at the NSA in the wake of leaks from ex-NSA contractor Snowden and is believed to have briefed Australian agencies about cyber security.

Australia ­expressed its concern over how US agencies allowed Australian secrets to be stolen by a “trusted insider’’ at the time a Mr. Edward Snowden – who now lives in Russia. In that particular case it was discovered that investigators remain in the dark about the extent of the data breach partly because the N.S.A. facility in Hawaii where Mr. Snowden worked … was not equipped with up-to-date software that allows the spy agency to monitor which corners of its vast computer landscape its employees are navigating at any given time. Snowden had further covered his tracks by logging into classified systems using the passwords of other security agency employees, as well as by hacking firewalls installed to limit access to certain parts of the system.

In the end Snowden got away with almost everything, the proverbial “Mother Load” including very sensitive information gathered by Australian spies over years of effort.

With an estimated 15,000 Australian intelligence files stolen by Snowden in that case intelligence officials fear further leaks. That is a conservative estimate by the way. In truth we have no idea how many files he got away with.

We however suspect the leaks contained top ­secret information about surveillance missions run by the NSA and the Five Eyes — a network comprising the US, UK, Australia, Canada and New Zealand.

The leaks damaged greatly Australia’s relationship with Indonesia when it was ­revealed Australian operatives and spies had been listening to the former Indonesian president’s phone calls and had hacked the personal phone of the president’s wife.