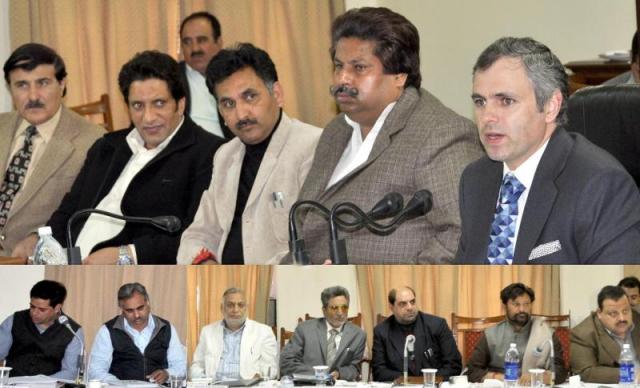 Jammu, February 11 (Scoop News) – Chief Minister, Omar Abdullah Friday said that Jammu and Kashmir is working with the Central Government on a programme of deploying healthcare patrol and critical ambulance service on the National Highway (NH) from Jammu to Srinagar to meet any eventuality on this count.

“The highway possesses greater challenge on account of landslides, weather vagaries and accidents as such a comprehensive strategy is required to be put in place to face this challenge and save human lives”, he said adding that additional Trauma Hospitals wherever required would form a part of the comprehensive project.

Chairing a review meeting of District Development Board (DDB) Ramban here, the Chief Minister gave approval to a Trauma Centre at Banihal along with a critical care ambulance.

“We have already approved critical ambulances for every district in the State and wherever there is additional requirement for such a facility, the Government would consider it positively”, he said adding that a Trauma Centre at Banihal is essentially important to cater to a greater area from Qazigund to Udhampur.

On the development of hilly and backward areas, the Chief Minister said that construction of roads and extension of health and educational facilities are receiving priority attention in these areas. “My Government is determined to transform the development scenario in the backward and far-flung areas constituting a greater chunk in the State”, he said and listed the projects launched in these areas for holistic development and employment generation.

“Major new power houses, railway projects, roads and bridges  along with four-lanning of national highway are mostly coming up in the hilly districts of Ramban, Doda, Reasi, Kishtwar, Udhampur, Leh, Kargil, Kupwara, etc”, he said adding that these works would not only give new impetus to the holistic development of these areas but help for generate substantial employment for the youth. “The executive agencies of these projects have been fully sensitized to absorb local youth and provide sub-contractors to the people in the areas where projects are located”, he said adding that wherever required the companies would be stressed to ensure absorption of locals in the projects.

The Chief Minister, however, said that the network of Industrial Training Institutes should provide befitting trainings to the trainees so that they are easily absorbed as skilled men-power in power, railway and other projects.

The Chief Minister directed the district administration to make full utilization of funds as per sectoral allocations and ensure timely completion of the schemes.

The Chairman DDB, Ramban and Minister for Revenue, Raman Bhalla appreciated the Chief Minister’s keenness of monitoring the progress under District Plans and lauded his interest to see backward and hilly rural areas moving fast on development track. He said Ramban District has shown remarkable progress on various fronts. He asked the officers to redouble their efforts in gving necessary help to the development in the district.

In their speeches the legislators highlighted various issues pertaining to the development of their constituencies. They demanded special attention for completion of works under RGGVY, PMGSY and other flagship schemes.

In a PowerPoint presentation the District Development Commissioner, Ramban gave sector wise resume of progress made and achievements registered under the current plan. He said 80.81 percent achievement has been registered under the current District Plan by the end of January 2011. He said out of the total availability of Rs. 54.27 crores over Rs. 43.86 crores have been expended during this period.