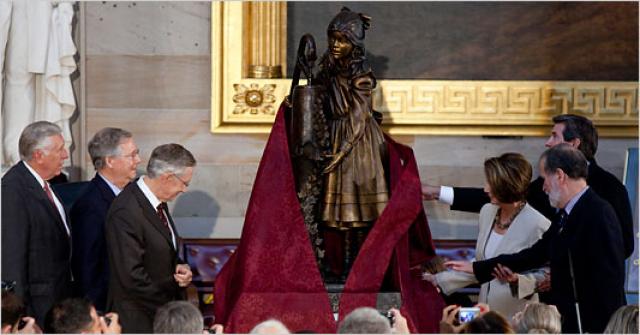 Yesterday, members of Congress unveiled the statue of Helen Keller in the United States Capital Building.  The statue honoring Keller depicts her as a child standing next to a water pump at the moment when she first made the connection, between the word water, spelled into her hand by her dedicated teacher Annie Sullivan, and water itself, pumped into her hand by Sullivan.  While this event was certainly a watershed moment for Keller in learning to use language to communicate, it freezes Keller in time as a little girl and reinforces popular notions of her as a child to the exclusion of her impressive and many achievements as an adult.  Helen Keller was the first blind and deaf person to earn a Bachelors degree, a published author, worldwide lecturer and activist for Americans with disabilities, for women’s suffrage, and for workers’ rights.  President Lyndon Johnson awarded Keller the Medal of Freedom in 1964.

Unfortunately, the Helen – as –child statue placed in the Capital Building is part of a broader and unjust history of the infantilization of people with disabilities.  One of the most egregious examples of this social phenomenon is “Jerry’s Kids” in which children with physical disabilities were presented and paraded on Jerry Lewis’ long running telethon to elicit pity and donations to the Muscular Dystrophy Association.  The perpetuation of images of people with disabilities as helpless children to be pitied and given charity from able-bodied, competent adults is not only oppressive, but also mutes the reality that people with disabilities are entitled to the full rights and privileges of all people. Quite simple, free and appropriate education, access to buildings, transportation and employment, and full inclusion in society are a civil rights issue.  In short, don’t pity, don’t fix; include.

In mainstream popular culture, associations between notions of disability and childhood helplessness persist to this day.  While many may argue that the moment depicted by the statue of Helen Keller represents a triumphant moment, one already immortalized in the Miracle Worker, it overshadows her many accomplishments and impactful activism.  The Capital Building is a highly trafficked tourist destination, and Keller’s statue may be the only contact Americans and international visitors may have with this heroic and awe-inspiring historical figure.  Congress and the State of Alabama had an opportunity to move away from archaic, oppressive and unjust associations of disability with infancy and to honor the woman, not the child. They blew it.