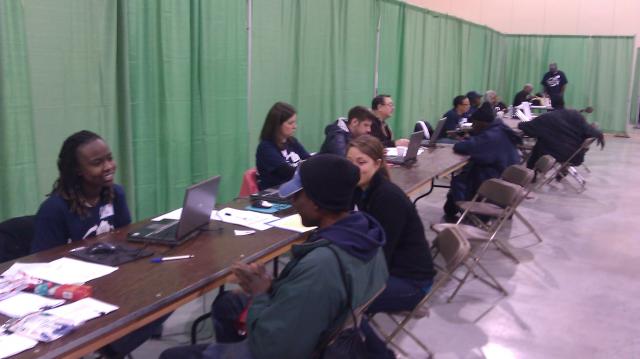 It could be said that what organizations working with the homeless want is to never have to meet someone they’re helping again.  To make it so that the people they work with can be self-reliant and no longer need the help of the many groups that have devoted themselves to the problem of homelessness.  That dream, however, is not always easily achieved.

To make more of a difference, the Substance Abuse and Mental Health Services Administration has been successfully growing the use of the SSI/SSDI Outreach, Access, and Recovery (SOAR) program.

“We’ve realized a lot of people working with homeless are having trouble accessing social security resources,” said Deborah Dennis, SOAR project director who has worked with the homeless for 25 years.
She explained that government resources like Supplemental Security Income (SSI) and Social Security Disability Insurance (SSDI), programs that provide a stipend of money to cover basic needs, can get people back on their feet with subsidized housing and health care, but can also be extremely difficult to get approval because of a large amount of red tape and bureaucracy.

The SOAR program is a model for how to submit an application to these programs in increase the chance for approval.  It helps along the process for individuals to be approved where otherwise they might find it too complicated because of substance abuse, mental illness or other difficult situations.

“Before doing this, I was frustrated feeling like we couldn’t really help people beyond a blanket and a bed,” said Dennis.  “This really changed the game.”

The national average for approval of applicants, according to Dennis, is roughly 30 percent.  On its first trial attempt in 2005, the SOAR system managed a 96 percent approval rating and, since full implementation has averaged out at 70 percent nationally.

“If you follow the curriculum, it definitely works,” said Latasha Howlett, state team leader for the Virginia SOAR organization.  Since the program is more of a system and method for completing the applications, if the program curriculum is followed carefully it can have definite benefits.  She has seen first-hand how much of a difference it could make and related a story about a man who had been denied multiple times over a long period.

“If you saw him, you could definitely tell something was up with him,” said Howlett.  She found the man needed care in a specialized rehab facility, but was denied the aid that would have made it possible.
When she had become involved, Howlett discovered that the man had been unfairly denied.  She resolved the issue with the help of contacts she had because of using the SOAR program.  The man was found housing that fit his special needs.

The community of people using the program is just as important as the model itself.  While SOAR is an established organization, local implementation is necessary to deal with the huge population that it is meant to help.  One such organization is Homeward, a Richmond based homeless outreach program.
“Communities develop a local process of communicating with the SSA and the State department of disability services,” said Erika Jones-Haskins, a member of Homeward.  “Case workers can be trained on the process.”

The organization has been coordinating the SOAR program in Richmond.  Jones-Haskins thinks that they get more done and help more people thanks to their using it.  Also, the local case workers make it available to more people.

“The dilemma is activating these benefits takes time,” said Dennis.  It takes roughly 20 to 40 hours per application over two months to reach approval for SSI or SSDI.  One case worker can manage 50 to 60 cases a year, and there’s always so many more.

Filed under: Health & Science, Lifestyle
Share Tweet Pin G Plus Email
previous article: People of all times went about in search of new lands and settles at new places
next article: Uzbekistan Tightens Up on Pharmaceutical Imports