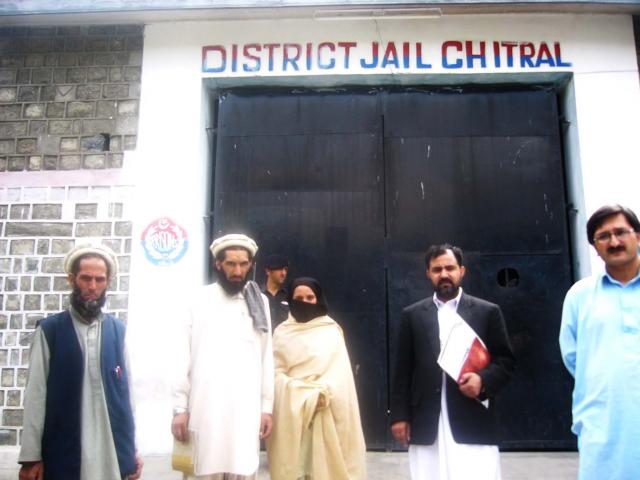 CHITRAL:  A helpless lady was released from district Jail (prison) Chitral on intervention of human rights activist an organization of Easy & Equitable Access to Justice Program Chitral funded by TROCAIRE. According to detail Hajira Bibi was allegedly accused by her husband,s brother in a fake case who was charged in a fake case under  Pakistan Panel Code 457 and 18 Zina Ordinance (18 ZO). Hajira was arrested by Mulkoh police but the man was alleged with Hajira was not arrested by police. Father of Hajira Bibi appeal to local human rights activist for trailing her case free of cost he said that she is innocent and was allegedly blamed by her brother in laws who have some land dispute with husband of Hajira Bib.

Chairman board of Director Niaz Ali Shah referred the case to legal advisor and member of board Niaz A Niazi Advocate. The case was under trial at the court of Additional Session Judge Orangzeb Khan. Prominent Lawyer Niaz A Niazi produced in court on behalf of Defendant Hajira bibi while Assistant Public Prosecutor (APP) Muhammad Afzal on behalf of prosecution. The leaned Judge after hearing arguments of both parties issued release order of Hajir Bibi. The Human Rights activists also went to district jail and recovered Hajira Bibi who was handed over to her father. It is worth to mention here that Hajira Bibi was allegedly blamed by her husband,s brother when her husband was not present at home and was arrested by local police after lodging FIR against her and was sent to jail on judicial remand. After releasing on bail she and her parents thanked human rights Chitral chapter for their efforts who was released on bail she appeal to human rights activists to hand over her two small children.

NCHD office and equipments winded up after closing its offices.

Office of National Commission for Human Rights NCHD was closed while its equipments, like computer etc were winded up after closing its offices at countrywide. As fund was not released by federal government for this project and some 80000 staff were relieved from NCHD as well as some 630 staff were jobless at Chitral.