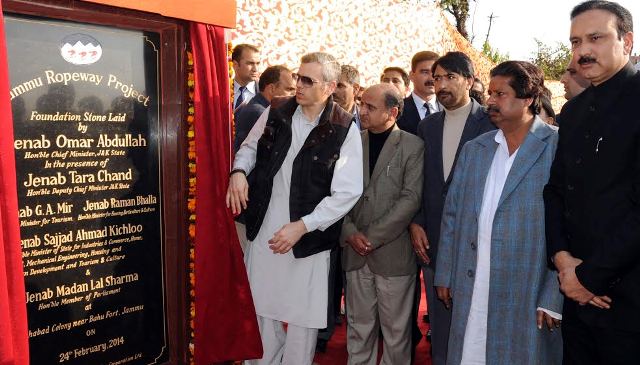 Jammu, February 24, (Scoop News)-Chief Minister, Omar Abdullah Monday said that equitable and inclusive development of all the three regions of Jammu, Kashmir and Ladakh remained benchmark of the functioning of his government and during the last five years all the three regions received similar attention on the development front.
“Those who are blowing the trumpet of regionalism are actually attempting to divide the people and hide the facts”, he said and added that during the last five years all the cherished projects in Jammu city where realized to the maximum. He said the establishment of the Central University, launch of 4th Bridge over River Tawi and its completion, construction of Artificial Lake, launch of Flyover, completion of Jammu Golf Course, foundation of Gandola-project after a long period of over 20 years and start of work on upgradation of Jammu Airport to the status of one of the best and modern airports of the Country are the significant projects started and implemented during the current tenure of the coalition government.
The Chief Minister highlighted the richness of Jammu and Kashmir in heritage-tourism and said that the historical depository, cultural diversity and renowned places of pilgrimage are the speciality of the State. He said Jammu possesses a novel position in this regard and linking of Katra with the Railways would have no effect on the trade and economy of Jammu city as it exists as the winter capital of the State and the hub of trade and economy. He said all efforts would be made to convert this advantage of the city into economic welfare of the people.
Laying foundation of Ropeway Project between Peerkhoo- Mahamaya-Shahbad near Bahu Fort here this afternoon, the Chief Minister said that by launch of this project, the cherished desire of the people of Jammu to have a Gandola like Gulmarg has been fulfilled. He said his government has to work hard to realize this goal.
The launch of project took a lot of time for getting clearance from Supreme Court, Forest Advisory Committee, Wildlife Board and other environment protection related agencies. The coalition government led by Omar Abdullah made constant and regular efforts to get the project cleared at all levels to start the work which yielded results and the foundation of the project was laid by the Chief Minister in presence of Deputy Chief Minister, Tara Chand, Minister for Tourism, G. A. Mir, Minister for Horticulture and Culture, Raman Bhalla, Minister for R&B, Abdul Majid Wani, Minister of State for Industries and Commerce, Sajjad Ahmad Kitchloo, Minister of State for Animal Husbandry, Nazir Ahmad Gurezi, Minister of State for Power, Vikar Rasool, Parliament Member, Madan Lal Sharma, Legislators, Devender Singh Rana, Abdul Gani Malik, Rani Beloria and Ajat Shatru.
The Chief Minister directed the concerned agencies to make the completion of project time bound so that Jammu will have this facility as soon as possible. He said efforts are being made to develop Jammu as an important tourist destination for heritage tourism. He said upcoming Artificial Lake in River Tawi and restoration of Mubarak Mandi Heritage Complex will give considerable boost to the efforts of the government to rope in more and more tourists to Jammu.
The Jammu Ropeway will consist of two sections. The Section-I with a length of 1137 metre will be between Peerkhoo to Mahamaya and the Section-II with 453 metre length from Mahamaya Park to Shahbad. The Ropeway will comprise of mono-cable detachable Gandola system of 6-seater for 600 persons per hour with imported grips, rope, cabins and other critical components.
The project likely to cost over Rs. 40 crores is likely to be completed in 30 months. For Terminal-I over 28 kanals of land and for Terminal-II over 56 kanals of land at Mahamaya and for Terminal-III about 15 kanals of land at Shahbad near Bahu Fort are being acquired for the project.
Deputy Chief Minister, Tara Chand, Minister for Tourism, G. A. Mir, Minister for Horticulture and Culture, Raman Bhalla, Minister of State for Tourism, Sajjad Ahmad Kitchloo and Parliament Member, Madan Lal Sharma also spoke on the occasion.
MORE AT http://scoopnews.in/det.aspx?q=36032