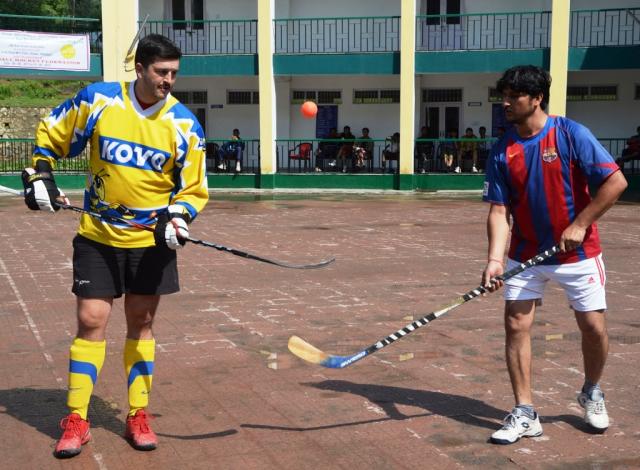 Pahalgam,  June 14  (Scoop News) –The 1st National High Altitude Ball Hockey Camp being organized in Pahalgam at Good Will School, Pahalgam, in which all the leading National players from different states of the country are participating.          Today the first match was played between J&K and Maharashtra which was won by J&K defeating Maharashtra by 2-1. The second match played between Punjab and Delhi was won by Punjab by 3-2.

After completion of these two matches a training session was organized under the guidance of world famous Ball Hockey Coach from Czech Republic  Michael. He provided necessary coaching/training tit bits to the participating players.

He expressed his great admiration for the organizers of the camp for organizing such a world level coaching camp and thanked the organizers for giving him an opportunity to provide necessary coaching to the players and also helping him to explore the world famous beauty of Pahalgam Area.

Mr Michael also added that the youth of J&K State are very much energetic and can grow in all spheres of life if proper guidance and facilities are provided to them and such type of camps should be organized at such beautiful places.

At the end of the session, he thanked all the members of J&K Ball Hockey Association and Secretary General  Waseem Raja and his team and authorities of Army Goodwill Public School Pahalgam for organizing such a great event and also thanked people of J&K and press media for giving him  a tremendous honour and respect.