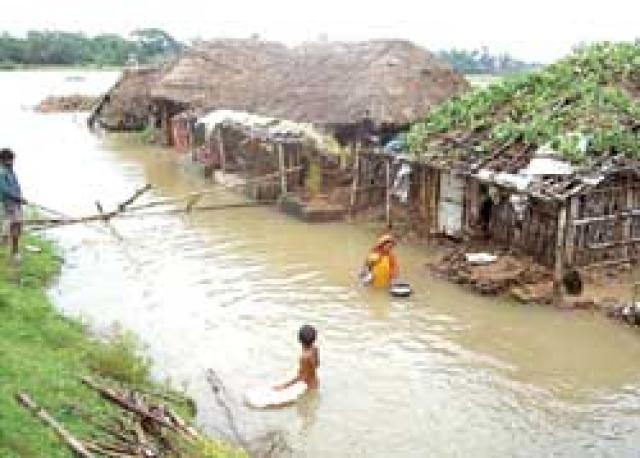 Globe Report (Cuttack,Orissa,India) : Life became worst hit in Orissa since past one or two weeks due to heavy and continuous raining. There is heavy raining at maximum places of Orissa. All the major cities in Orissa are highly affected by the heavy raining. There is high alert in all the coastal areas of Orissa. Fisher Men are highly alerted by the Orissa Government advising them not to venture out for fishing into deep sea. Balasore District is highly affected by flood and rain waters have made it impossible for the Administration to reach the flood affected villages . About One Lakhs of people in North Orissa have been highly affected by the floods with rivers crossing their banks following five days of constant rains. Balasore is one of the worst flood affected districts with Eight Lakhs ( 8 Lakhs ) people affected and 100  villages still inaccessible. Government Administrators are unable to get reach to flood affected areas to rescue flood  victims due to disruption of road communications. Due to high flow and underwater current, the rescue teams are unable to rescue flood affected people in Balasore. About Fourty Thousand flood affceted people have been rescued to safety and Government has provided them temporary shelters in different schools giving them food and drinking water. Many buildings, small sheds and cottages  have been washed out in flood water. All the schools and colleges have been closed due to the flood situation . More than 800 villages in the Balasore district were cut off for the last two-three days . Around 150 to 200 boats had been deployed in relief and rescue work but they were unable to carry relief because of the under water currents and high flow of flood water. With the help of army helicopters, it was possible to drop relief packages in flood affected areas. Rescue work is in progress. The next few weeks could see the situation worsen with rains continuing in the Balasore and in other coastal areas.  Heavy rainfall is  likely to occur at a few places with extremely heavy falls, more than 25cms,. at isolated places over north Orissa. Many places of Cuttact district are also affected due to heavy raining and there is 2 to 2.5 feet deep water in many streets of Cuttack District. Due to continuous raining people are shelter less in Cuttack and the people are taking shelter in municipality schools .   Written By:-Mr. Debasis Pradhan. For Globe Report,Cuttack,Orissa,India.