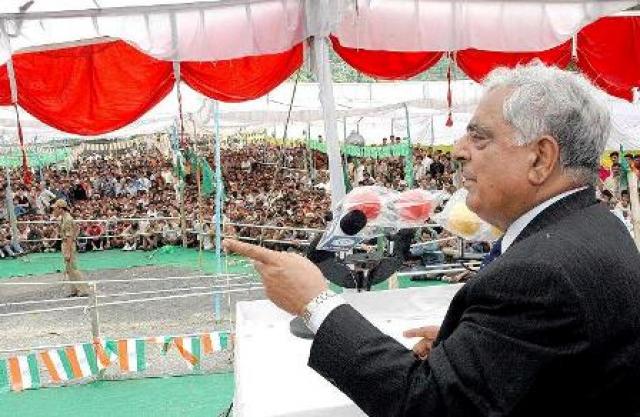 , April 29 (Scoop News) –  Reiterating that dialogue is the only mean to solve all vexed problems, patron of Peoples Democratic Party (PDP) Mufti Mohammad Sayeed today said that and should take the peace and reconciliation process to its logical end for restoring lasting and sustainable peace in this region.

Addressing public meetings at Simbal Camp area of  R S Pura assembly segment, and Dogra Hall in Jammu city, Mr Sayeed said that situation in Pakistan has changed and the Pakistan was also giving encouraging response to the dialogue and reconciliation process so it was high time for the taking some bold steps to solve all bilateral issues including Kashmir.

“Atmosphere is conducive for initiating some concrete steps for resolution of this problem”, he argued and said that it was also desire of Prime Minister Dr Manmohan Singh to solve the problem. He, however, emphasizes on the need of evolve consensus on Kashmir because peaceful relations between and were in the interests of the people of both the countries.

While pointing towards some bold initiatives taken to ease trade on Wagha border, he said that Indo Pak was dialogue again on the track and it needed to be complemented with action from both sides. He said that foundation for restoring peace between and was laid when the then Prime Minister Atal Behari Vajpayee had extended hands of friendship towards on April 18, 2003.

Highlighting the historical role played by the PDP in normalizing relations between and Pakistani, he said that opening of cross LoC routes was the biggest ever Confidence Building Measures (CBMs) between two countries.

PDP patron that people of the State had voted National  Conference only for the governance and development but this party has failed to even carry forward the agenda of governance of the previous PDP led regime. “Situation has been returned back to pre-2002 because chaos and administrative anarchy has gripped the state once again”, he observed.

Responding to the demands raised by the local people at Simbal camp, problems of refugees from Muzafarabad, Poonch and Haveli would be discussed when even any meeting for the resolution of problems would be held. He assured that PDP would incorporate this issue in its agenda. “Problems of these refugees would be part of negotiation on ”, he assured and demanded one time settlement of the issue of these refugees.

Speaking in the meeting at Dogra Hall, former Chief Minister Muzaffar Hussain Beig regretted that Safai Karmacharies who were brought to State in 1957 have been struggling to get basic rights.

Filed under: Politics, World
Share Tweet Pin G Plus Email
previous article: How tomake money as an online journalist
next article: NAXALS MADE IT MOCKERY OF ODISHA STATE GOVT.