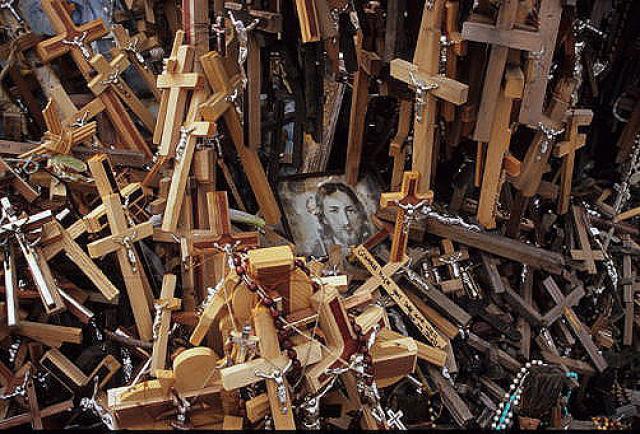 Bulldozed three or four times by the Soviet authorities the Hill of Crosses in Northern Lithuania always came back. Today, over 50,000 crosses of all sizes are found at this site which occupies perhaps 1,800 square metres of land, spread over two hillocks, 12km north of the city of Siauliai, Lithuania’s 4th largest city. The crosses are mainly placed here by devout Catholics who regard the Hill of Crosses as a place of pilgrimage largely because in 1993, Pope John Paul II held a mass at the site. The construction of a shiny new Franciscan monastery in 2001 indicates the growing importance of the Hill of Crosses as a spiritual centre. This importance mirrors Lithuania’s growing self-belief as an independent country that joined the European Union two years ago, along with its Baltic neighbours, Latvia and Estonia.

Visitors to this site, just off the main Siauliai to Riga road, will probably first notice the large wooden statue of Jesus with his arms wide apart in welcome. A set of steps neatly bisect the hillock and from the top visitors can see the new monastery and also better appreciate how densely packed the crosses are together. The crosses are not all in orderly rows as in a neat cemetery, but are sown over the ground as though sprouting from a special kind of spiritual seed spread by a divine hand. Many of the larger crosses have hundreds of smaller crosses made from metal, wood, and even pink plastic hanging from them. There are occasional images of Jesus amongst the crosses too and it’s hard not be moved by the acts of faith that placed them here.