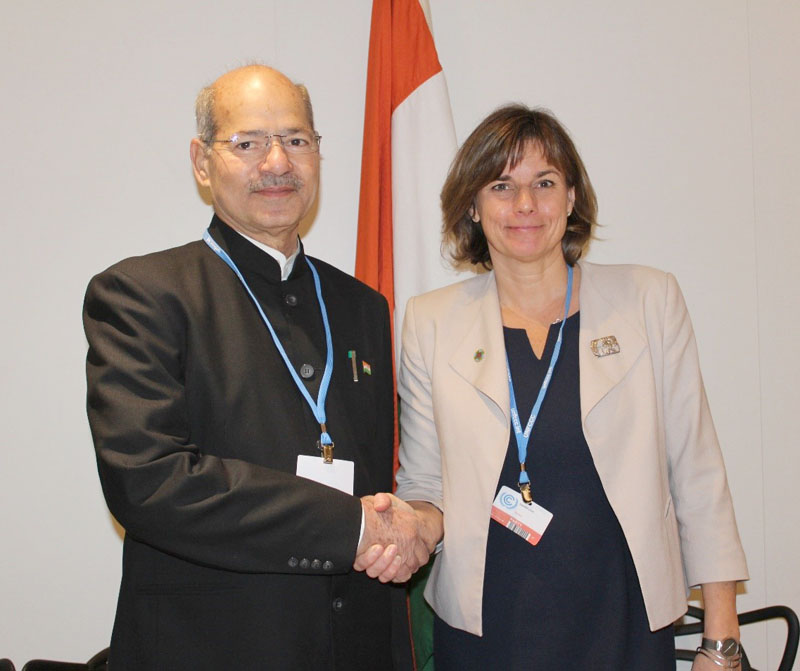 The Minister of State for Environment, Forest and Climate Change (Independent Charge), Mr. Anil Madhav Dave and the Swedish Minister for International Development Cooperation & Climate and Deputy Prime Minister, Ms. Isabella Lovin at a bilateral meeting at COP 22, in Marrakech, Morocco on November 17, 2016.

Marrakech (PIB-GR-TYP-BIN): “Himalayas must be seen as a single, living entity and not in separate parts. Only if Himalayas survive will Indian culture and civilisation survive”, Minister of State (Independent Charge) of Environment, Forest and Climate Change, Mr. Anil Madhav Dave, said at COP 22 in Marrakech on Thursday. Addressing a session – “Impact of Climate Change on the Himalayan Ecosystem” held as a side-event at the India Pavilion in COP 22, Mr. Dave said that Himalayas cannot be protected, but must be served with a spirit of selflessness.

The expected outcomes from the session include key inputs for developing strategic plan for addressing issues of Climate Change impacts on the Himalayan ecosystem. The side-event held at the India Pavilion on Thursday was an attempt to highlight the emerging needs for evolving new models of conservation and sustainable development that help restoring intricate balance between economic interests and ecological imperatives in the region under changing climate scenario.

The Himalayas are among the most sensitive ecosystems to climate change and being affected at a faster rate than other terrestrial habitats. Climate impacts form an important threat to mountain ecosystems. Over 80 per cent of the population is involved in agriculture, animal husbandry, forestry and other biodiversity dependent livelihood activities. Nearly 70 per cent of the population still relies for health care on medicinal plants.

The session was organized under the aegis of GB Pant Institute of Himalayan environment and development.