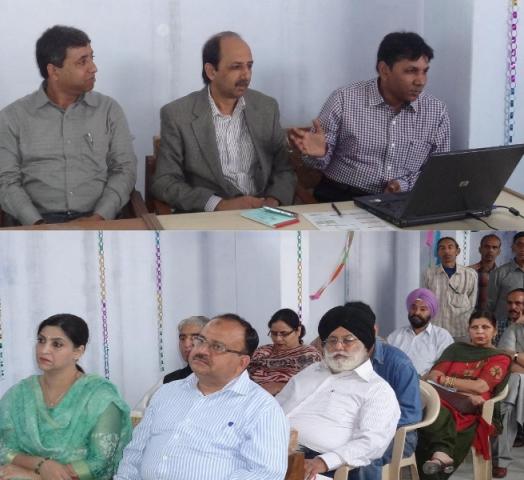 , November 01 (Scoop News) – With the inauguration of Workstation and a 3-day Workshop on e-Granthalaya Software at SRS Central Library, automation and networking of the oldest public library in the State began here today. This comes close on the heels of launching of the automation and networking of public libraries project in J&K in the summer capital on Friday by Minister for Tourism & Culture, Nawang Rigzin Jora. A similar workshop had concluded at SPS Central Library, on Sunday. SRS Central Library is the oldest and the largest public library in Jammu & Kashmir established in 1879 A. D.

. Matoria made a power point presentation on e-Granthalaya and the project. He also answered queries from the audience.

During the workshop, a group of officials of the Department of Libraries and Research and the manpower hired by the project executing agency would be trained in the use of e-Granthalaya software before actually starting data entry as part of the project implementation which will begin immediately after the conclusion of the workshop.

Speaking on the occasion, Khalid Bashir Ahmad said that the launching of the automation and networking of public libraries is a significant initiative taken by the Government to switch over from manual to automated library service and making library information available online. He said in the first instance four major public libraries including SRS Central Library, SPS central Library, Oriental Research Library and City Central Library have been taken up for automation and networking. On successful completion of the pilot phase, other libraries at district and tehsil level and down would be automated and made part of a single networking system. He said the Department is working on another important project to digitize its rich collection of rare books in various languages and make them available on Internet along with a huge treasure of about 6000 digitized manuscripts. The two projects in conjuncture would revolutionize public library services in the State, he added.

Khalid also gave a brief account of other recent initiatives taken by the Department to improve library services both in terms of infrastructure and collection. He said in the next few years the library services in the State would be reckoned with international standards. He made a special mention of books on competitive examinations made available this year for student community interested in cracking civil services examinations. He said as many as 100 titles on different subjects prescribed for these examinations have been supplied to central, district and tehsil libraries. Before the closure of the current financial year, libraries at block and border block levels will also be provided these books, he said.

Writers and library lovers who were present at today’s function hailed the initiative of the Department of Libraries to automate and network public libraries in J&K and said that this would go a long way in improving and upgrading public library services in the State and generate interest among people towards libraries.