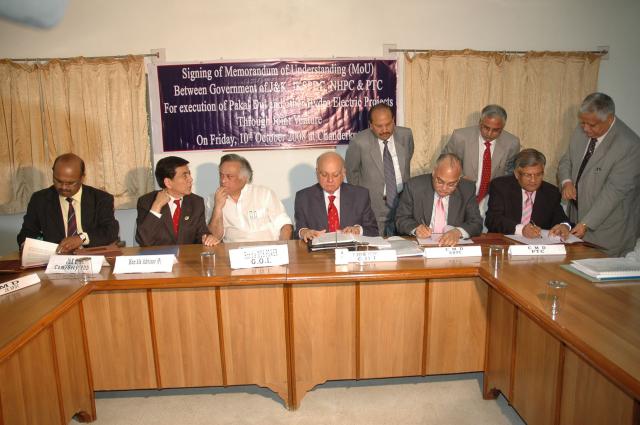 A Memorandum of Understanding (MOU) was signed between Government of Jammu and Kashmir, Jammu and Kashmir State Power Development Corporation, NHPC and Power Trading Corporation (PTC) for execution of Pakal-Dul and other hydro-electric projects through joint venture in the State here today. The MOU was signed in the presence of Union Minister of State for Power, Mr. Jairam Ramesh, Advisor to Governor, C. Phunsog and Union Power Secretary, Mr. Anil Razdan by Commissioner/Secretary, Power Development, Mr. S. K. Nayak, CMD NHPC, Mr. S. K. Garg, CMD, PTC, Mr. T. N. Thakur and MD Jammu and Kashmir State Power Development Corporation, Mr. Shant Manu. The Divisional Commissioner, Jammu, Mr. Sudhanshu Pandey and other senior officers were also present on the occasion. Describing the inking of MOU as a major milestone in harnessing vast hydro power potential of the State, Union Minister of State for Power, Mr. Jairam Ramesh said that it would accrue great economic benefits to J&K. He said that with the completion of the hydel power projects to be taken up by the joint venture company, the availability of power in the State would increase considerably to meet the requirement. He said that the work on Pakal Dul,and two other hydel projects on river Chenab with a capacity of 2100 MW should be started soon and executed in a business like way to complete these in a time bound manner. The Union Minister of State for Power congratulated all the parties for signing the historic MOU and said that immediate priority should be to register the company and complete other formalities.  The Advisor to Governor, Mr. C. Phunsog said that it is an important milestone for harnessing huge power potential of 16000 MW of river Chenab. He said it is the beginning and exuded confidence that more power projects would come up in the State in near future.  The Commissioner/Secretary, Power Development, Mr. S. K. Nayak gave details of the MOU. He said it is an auspicious occasion for the State.