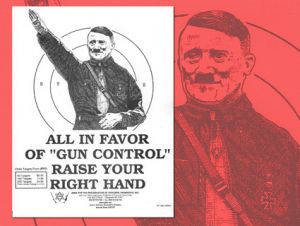 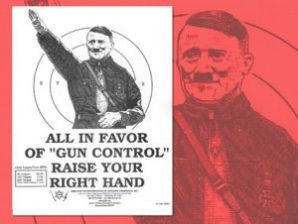 It should surprise no one that reads my articles when I say I get hateful attack messages, emails, and comments from rightwing nutcases on a regular basses. After all, I often write despairingly about political extremists, especially Teabaggers. However, the Teabaggers and radical rightwing deserve national scorn. They have been shown at times to be racist, homophobic, bigoted, pathologically lying fear mongers. They have mocked disabled people at town-hall meetings and spit on politicians. Additionally, they routinely threaten liberals, progressives, and minorities with violence.

I’ve documented all of these behaviors in numerous articles the past. As far as I am concerned, Tea Party members are some of the most despicable characters participating in American politics today.
Earlier this week, I posted an article pointing-out key facts the NRA doesn’t want Americans to know. As is normal practice for me, my research and cited sources included non-partisan fact-checking sites like Politifact.com, non-partisan political watchdog organizations like OpenSecrets.org, and authoritative studies, including one by the American Public Health Association.

In spite of the research and links provided in the article, after posting I once again was almost immediately (and predictably) called a “liar”. Typically, if a rightwinger wants to attack me on a comment thread I will leave it up. The other day, I received a couple similar attacks including this most common rightwing NRA propagandist comment from MikeN. This response is so common, (Hitler and all) that I thought I would finally address it point by point in an article.

So, here is MikeN’s comment to my pervious article:

MikeN: “One lie after another. Want an unbiased report on gun violence? Read the report that Obama himself ordered the CDC to conduct. He did not like the results so the report has been given no publicity by the Obama-loving media. The author of this blog is obviously a left wing radical as evidenced by HIS hateful rhetoric and characterizations of conservative groups. Nowhere in the world has gun banning and confiscation led to decreased crime. It HAS however, led to murderous dictators slaughtering their own people to rise to and keep power. That has been demonstrated many times over throughout history. Just look to the likes of Hitler, Stalin, Castro, Pol Pot, Amin, and too many others to fit in this column. Read the CDC (a non- biased government agency) then we can talk about guns and violence.”

I’m not sure if MikeN actually read my article? Had he read my article he would have discovered I wrote about the NRA working for nearly two decades to cut-off funding for the CDC and other government agencies doing research on gun violence. I pointed-out that in April of this year President Obama ended the spending freeze. Now the CDC has released its first report.

In his comment to me, MikeN makes the same mistake CNN’s Crossfire host S.E. Cupp made. According to Politifact.com , “Cupp (and the majority of the rightwing mainstream media) exaggerated the findings of the CDC report, which merely rounded up studies as it argued for more and better research. In most cases, the report was intended to spur more research, not settle controversial claims once and for all.”

S.E. Cupp and MikeN want to pretend like the CDC report states gun control policies don’t work. When in fact, the report states we don’t have enough data to make a determination on what policies work and which ones don’t seem to have a positive effect in reducing gun violence. That’s a very big difference from the intentionally misleading rhetoric coming from the pro-NRA propagandists.

In fact, if anything the CDC report, which MikeN suggests we read (and “then we can talk about guns and violence”) repeatedly supports the point I make in my pervious article. By cutting-off CDC funding the NRA’s paid legislators left our nation woefully lacking vital information about gun violence.

According to this new CDC report, “Whether gun restrictions reduce firearm-related violence is an unresolved issue…A paucity of reliable and valid data, as discussed in the sections above, is a major barrier to the development of the most effective policies, strategies, and interventions for prevention of firearm violence…Nonetheless, many interventions have been developed and studied, and they point to areas requiring important additional research.”

Yep, what the CDC report actually states is that (thanks to the NRA and their paid-off legislators) there is an astonishing dearth of information on gun violence and gun control policies in the U.S.

MikeN goes on, “Nowhere in the world has gun banning and confiscation led to decreased crime”.

However, whether gun restrictions reduce firearm-related violence is not really an unresolved issue. If there are zero guns around gun violence will reduce to zero. It doesn’t take a brain surgeon to understand that Japan has fewer gun related deaths then the U.S. because they have fewer guns. This is just common sense.

MikeN’s next comments about Hitler and other dictators are actually one of the most commonly repeated lie told by the rightwing pro-gun radicals. At first, this is one that should seem to be easily dismissed. However, many radicals on the right truly believe this myth.

Some claim Alex Jones started this lie. Or that he just told this lie the best. Certainly MikeN’s version of the myth is nearly a repeat of Jones’ version verbatim. An older connection to this claim goes back to the early 80’s and a rightwing Jewish organization. The graphic in this article shows this theme used by the group in a poster.

Here again is MikeN’s claim, “It HAS however, led to murderous dictators slaughtering their own people to rise to and keep power. That has been demonstrated many times over throughout history. Just look to the likes of Hitler, Stalin, Castro, Pol Pot, Amin, and too many others to fit in this column.”

Here is the problem with the above claim. None of it is true. It is complete revisionist history. University of Chicago law professor Bernard Harcourt detailed in a lecture the entire historical bunk behind Hitler and gun control. At the end of World War I, one of the conditions of the Versailles Treaty was for Germany to surrender all their weapons.

This happened well before Hitler came to power. Hitler opposed the Versailles Treaty and the gun control laws. Once he gained a small amount of power, he quickly armed his storm troopers (S.A.). The S.A. were a militia that roamed the streets of Germany attacking unionists, socialists, and Jews. Today’s radical rightwingers attack unionists, socialists, immigrants and minorities.

Once Hitler suspected his storm troopers might be going rogue and plotting his overthrow, Hitler quickly had the S.A leadership wiped-out and replaced with his dreaded S.S. units. The event was called “The Night of the Long Knives” but the entire S.A. leadership was actually gunned down. Both Hitler and Mussolini used armed rightwing militias to brutalize and intimidate socialists, unionist, teachers, and others leftwing leaning organizations.
Summarizing Harcourt’s lecture Mother Jones points out, “In 1938, under Nazi rule, gun laws became significantly more relaxed. Rifle and shotgun possession were deregulated, and gun access for hunters, Nazi Party members, and government officials was expanded. The legal age to own a gun was lowered. Jews, however, were prohibited from owning firearms and other dangerous weapons.”

Still to this day, American neo-Nazi organizations are often seen at gun show and gun rallies. On their websites and in their literature images of gun paraphernalia is proudly displayed next to swastika. As Harcourt points out, the White supremacists are not hanging out with the pro-gun control hippie liberals.

Hitler used his brown shirts and the threat of violence not unlike the Teabaggers and the NRA supporters want to do in the U.S. The Southern Poverty Law Center provides on their website a “detailed listing of major terrorist plots and racist rampages that have emerged from the American radical right in the years since Oklahoma City. These have included plans to bomb government buildings, banks, refineries, utilities, clinics, synagogues, mosques, memorials and bridges; to assassinate police officers, judges, politicians, civil rights figures and others; to rob banks, armored cars and other criminals; and to amass illegal machine guns, missiles, explosives and biological and chemical weapons. Each of these plots aimed to make changes in America through the use of political violence. Most contemplated the deaths of large numbers of people — in one case, as many as 30,000, or 10 times the number murdered on Sept. 11, 2001.””

The list is staggering. Ironically, every day we hear on the rightwing radio shows and read on their blogsites folks like Glenn Beck making statements about “hunting down progressives”, which makes them sound more like the Nazis than Nazi hunters. NRA zealots like Ted Nugget joked about killing 450 pigs from a helicopter in Texas and then followed up by saying, “And now if they would just take me to South Central. … Okay! I kid.”

Folks like Nugget claim they are only entertainers and are not responsible for unbalanced people taking their words seriously. Yet, there are unbalanced folks will take their words seriously. A couple years back, not far from my house, a radical rightwing listener of Glenn Beck named Bryon Williams loading up his pick-up truck with a couple of guns, put on a bullet proof vest and headed out to the offices of the liberal environmental organizations the Tides Foundation and the ACLU. His plan was to kill as many liberal progressives as possible and help start a homegrown war against the U.S. government, Obama, and his liberal supporters.

Fortunately, the California Highway Patrol pulled Williams’ truck over before he reached his intended targets and a shoot-out erupted. Williams received a couple minor injuries before surrendering.

As the SPLC report documents, this is not an isolated incident. Rightwing hate groups, including Republican Fascists are on the rise. Violent attacks on unions, supporters of affordable health care, environmentalists, immigrants and minorities are all on the rise. Rightwing militias all across our country dream about becoming the “patriotic” jackbooted thugs of America. We can not let stand the revisionist history coming like the NRA, MikeN, and the Teabaggers. Nor can we let stand the deliberate distortions, misinformation, and general denial of facts coming from the dishonest rightwing.