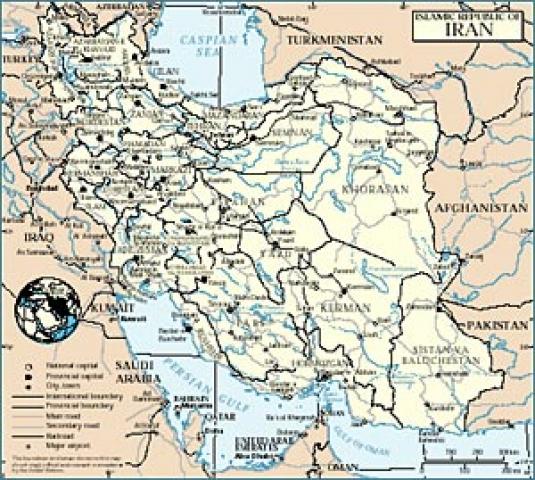 With a population of 67.2 million in 2001 (HDR 2003), and a GDP of US$ billions 114.1 in 2001 (HDR 2003), Iran is the second most populous country and the second largest economy in the middle-eastern region. It is also the second largest OPEC oil producer and has the world’s second largest reserves of gas. Iran is progressively emerging from a long period of uncertainty and instability, marked by the destructive war with Iraq, internal post-revolutionary strife, international isolation, and deep economic instability. The petroleum industry is Iran’s economic mainstay with oil accounting for 80% of export revenues. In the late 1990s, Iran’s state-owned oil and gas industry entered into major exploration and production agreements with foreign consortiums. Textiles are the second most important industrial products.

Since the 1979 Revolution, Iran has given strong and special emphasis to human development, social protection, and "social justice," with significant progress to-date. As a result of major investments in the social sectors over the last 20 years with universal education and extensive health coverage, and an active government distribution strategy through direct transfers and indirect subsidies, the proportion of the population living below the poverty line has fallen dramatically. In 2002 a little more than 6% of the population was living at less than $2 a day (Millennium Development Goals Report, 2004) Virtually all social indicators have shown improvement to the point where Iran now ranks at or near the top of comparable countries. The country’s health and education indicators are among the best in the region. Of particular note is the closing of the gender gap in education, where enrolment rates for boys and girls show only small differences, in literacy, and in political representation The fourth Five Year Development Plan envisages upgrading the quality of the educational system at all levels, and improving its effectiveness in terms of a better alignment with the needs of the economy and the labor market. It also envisages reforming education curricula, and developing appropriate programs of vocational training, a continuation of the trend towards labor market oriented education and training . Iran’s “Master Health Plan”, adopted in the 1980s for the period of 1983-2000 accorded priority to basic curative and preventive services as opposed to sophisticated hospital based tertiary care, and focused strictly on the population groups at highest risk, particularly in deprived areas. Moreover, as a result of the prioritization and effective delivery of quality primary health care, health outcomes in rural areas are almost equal to those in urban areas, with outcomes in terms of infant and maternal mortality nearly identical between urban and rural areas.

Iran has an extensive social safety net and transfer system that reaches a large number of the poor. The subsidies system is largely seen as oversized, inefficient and untargeted. Experts recommend an integrated reform in the subsidies system for it to reach its objectives of growth and social justice. At present, there are about 28 social insurance, social assistance and disaster relief programmes. These programmes include direct cash transfers, housing provision, education scholarships, training and job-search assistance, and health, disability, old-age and survivorship pensions and social security coverage. Iran has a significant prevalence of poverty and a significant rate of unemployment. Although unemployment has reduced from 14.7% in 2002 to 12% in 2004, Iran still has to create 700,000 jobs annually. On the demand side, the actual growth rate of the economy (5.8% on average over the past three years) has proven to be insufficient to meet the labor supply inflow. Even at the current growth rate of the economy, only 500,000 new jobs have been created; thus, the threat of an explosive unemployment problem .

Iran’s central position has made it a crossroads for migrants and it has emerged as a major transit areas. The population is not homogeneous – although it has a Persian core that includes over half of the people. Azerbaijanis constitute almost a quarter of the population. The country is a major transit route for narcotics coming from neighbouring Afghanistan and Pakistan and destined for Europe, Central Asia and the Persian Gulf region

The first HIV case in Iran was identified in 1987. The total number of registered HIV infected cases was calculated as 7,510 by late September 2004, of which 95.1 percent were men. If the cases where the mode of transmission is unknown was overlooked, (32.7 %), injecting drug use (57.4 %) is the mode of transmission mainly responsible for the spread of HIV/AIDS in the country. Sexual contact (6.8%) was the second most common factor for HIV transmission in the country.

According to WHO the estimates of HIV cases in Iran are approximately 22000 to 30000. While figures remain low, there is a high risk of dramatically increasing prevalence if broad range interventions are not put in place. As new NGOs are emerging in and existing NGOs broaden their range of services, there is a need to support approaches with human resources, technical capacity building and infrastructure to enable them to strengthen their responses. The proposal outlines a range of interventions to not only strengthen their respective collective capacity but also to enable them to implement a wide range of approaches to target at risk groups in Iran. Experts highlight the danger of rapidly increasing HIV rates within particular groups, including youth, drug users and sex workersIn most countries, the levels of HIV infection among prison populations tended to be significantly higher than in the general population. In Iran, incarceration appeared to be the biggest risk factor for HIV infection, according to UNAIDS December 2005 Update

Another factor that adversely affected the spread of the epidemic was related to the cultural and social consequences brought about by extra-marital sexual activities. As a result of this, those suffering from HIV/AIDS remain hidden and do not present themselves to the relevant medical centres for treatment. In conclusion, the spread of HIV/AIDS infection cannot be easily controlled and prevented. Although condom use has increased over the years, the data relates only to married people.

There are also two major external reasons affecting the spread of HIV/AIDS in Iran. (1) Since the country is located on a major narcotics transit route in the region and also neighbours Afghanistan (the biggest narcotics producer in the world) the drug addiction rate, particularly through injection has been growing in the country. (2) To the north of Iran, there are also the Newly Independent Countries (NICs) that are suffering from one of the fastest growing HIV/AIDS epidemics in the world. Therefore, the rapid spread of HIV/AIDS in neighbouring countries, especially as a result of narcotics smuggling has, in turn, caused the increase of HIV/AIDS infection amongst domestic injecting drug users

A National Committee to Combat HIV/AIDS, chaired by the Minister of Health, was set up in 1987. This Committee provides policy guidance to the National AIDS programme. The National Strategic Plan, based on multi-sectoral collaboration and co-ordination, is mainly premised on prevention and contains the following major activities:


About 1,200,000 people are annually tested for HIV in Iran. Injecting drug users, STD patients and people who frequently travel abroad are among those who are tested.

Medicines, which will help the infected persons live longer, are distributed free of charge. The Government is starting a telephone counselling initiative and national distribution of 10,000,000 brochures on HIV. It is also considering IEC interventions in public spaces. This is the first time that such a massive response to the epidemic is planned in the country.

HIV is circulating widely among drug injectors, of whom there were an estimated 200 000 in 2003 and is feared to spread further. Studies conducted in 2005 underscored the urgent need to broaden proven preventive programmes, especially for incarcerated drug injectors. Beyond the prison gates, comprehensive harm reduction programmes must also be expanded if Iran’s HIV epidemic is to be curbed. Most of the drug injectors who participated in the Tehran study were sexually active, many either bought or sold sex and only 53% of sexually active injecting drug users had ever used a condom.

An earlier study had found that about half of injecting-drug users were married, and one third had reported extra-marital sex (UNAIDS/WHO, 2004), which suggests a clear possibility of sexual transmission of HIV from infected drug injectors to their sexual partners. Although sketchy, the available evidence indicates that low levels of condom use among sex workers also put them and their clients at risk of infection. Social norms and religious values also inhibit unmarried persons from registering any purchase of condoms. As a result, the rate of high-risk sex cannot be calculated.


In 2000, the government set up “ Triangular Clinics” for injecting drug users in Kermanshah Province. Three main measures have been taken in these clinics. These are (1) reducing the level of risk among injecting drug users, (2) curing people suffering from the sexually transmitted diseases and (3) protecting and supporting patients infected with HIV/AIDS. In fact, the clinics collect the above three groups together in order to facilitate the organization and provision of integrated services to these patients. “Triangular Clinics” are recognized as representing “best practice” in the Middle East and North Africa for controlling and preventing HIV/AIDS infection. These clinics have been so far established in all provinces where integrated services are being provided throughout the country. The priority now is to integrate these into the primary health system care of the country.

The MDG Report 2004 lists some of the major challenges in relation to controlling HIV/AIDS infection I These are :
Improving public attitudes towards HIV/AIDS infected patients
Paying more attention to solve the issues concerning sex workers
Providing the necessary financial resources to prevent and control HIV/AIDS infection
Amending rules concerning drug addiction. (Since drug addiction is considered a crime, HIV/AIDS infected addicts do not present themselves to medical centres for treatment)
Overcoming weaknesses in diagnosis and treatment facilities dealing with the disease, especially shortage of HIV/AIDS specialists and professional training courses Reducing the high cost of diagnosing and treating HIV patients.

UNAIDS Theme Group was set up in 1995. The Group collaborates with the Ministry of Health and Medical Education’s public education and workshop activities.

WHO provides technical support to the Ministry of Health and Medical Education with its national program to control HIV/AIDS. This also includes control of sexually transmitted infections. Some of the activities undertaken are:


Within the framework of a UNFPA joint project with Ministry of Education, 700,000 copies of a poster were produced on HIV/AIDS transmission and prevention. The poster was distributed nationwide. 200,000 copies of an accompanying brochure were also printed and distributed to 3rd and 4th grade teachers as well as to lower and upper secondary schools.

GFATM has disbursed third round of funds. The programme aims at complimenting Government approaches to prevention and care and to control the spread of HIV through particularly at risk groups. While some initiatives will target the general community, specific interventions will be expanded or scale up, or new programs developed to reach young people, street children, drug users, sex workers and other at risk women and also aim to reduce stigma and discrimination for people living with and affected by HIV.