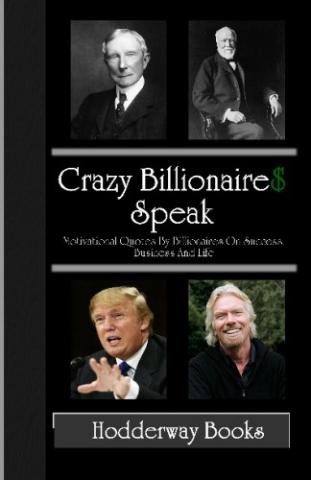 Hodderway Books, the author of the international bestseller, Crazy Billionaires Speak, has named Facebook Founder, Steve Jobs and Talk Queen, Oprah Winfrey as two of the greatest role models for young Africans.
Hodderway Books, who was speaking at a gathering of College students at Egerton University, Kenya, said that Steve Jobs has changed the world through his innovative use of Technology, citing the iPhone, iPad and iPods as eternal legacies which Mr. Jobs has left for the world. On the other hand, Hodderway Books describe Oprah Winfrey as the very definition of the American dream. He called her “The greatest woman alive” and “an inspiration to young women all over the world.’
Both Steve Jobs and Oprah Winfrey are featured in the national bestselling book, “Crazy Billionaires Speak”, written by Hodderway Books.
The book, Crazy Billionaires Speak (ISBN: 978-1440428944), contains inspiring business, success and life quotes from some of the world’s most successful and recognizable entrepreneurs.
Some of the billionaires featured in the book include 20th century business titans such as John Rockefeller, Steel magnate Andrew Carnegie, Walt Disney, Industrialist Henry Ford, Retail moguls J.C Penney and Sam Walton as well as 21st century business pacesetters such as Richard Branson, Donald Trump, Bill Gates, Warren Buffett, and Oprah Winfrey among several others. Mark Cuban, Donald Trump, and Richard Branson are also among the successful entrepreneurs that have been featured in the book.
Crazy Billionaires Speak contains almost 1,000 carefully, selected quotes from some of the world’s most successful people. The book is an engaging read, and would make an excellent companion in leisure time on the bus, subway or airplane. The quotes were carefully selected, and are thought-provoking. They would make the reader think about their life, and motivate them to succeed against all the odds. The quotes will motivate the soul, challenge the mind, and uplift the spirits.
Part of the proceeds from the sale of Crazy Billionaires Speak will be donated to Food 4 Africa.
Crazy Billionaires Speak is published in U.S.A by Createspace, in Indonesia by Ufuk Press and in Switzerland by Hodderway Books.
Crazy Billionaires Speak is available on Amazon.com and other channels around the world.
Filed under: Media & Tech, World
Share Tweet Pin G Plus Email
previous article: J&K men’s team lifts Handball tournament trophy
next article: Back to court for Vedanta Resources’ controversial mine