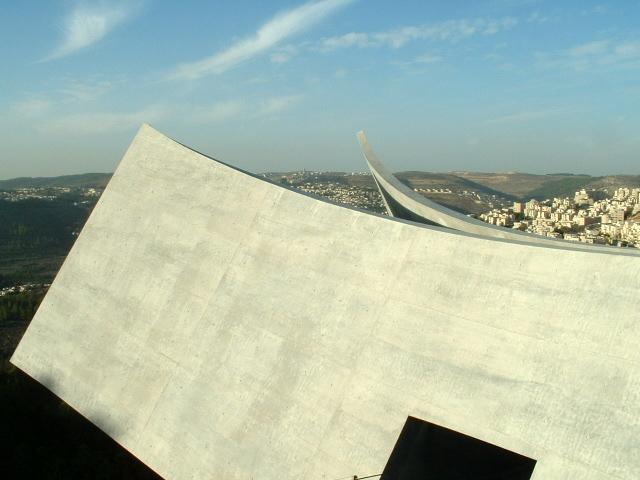 Holocaust Remembrance Day was observed in Israel today. When I was growing up, Yom Hashoah was never commemorated in my home. Who needed one day a year for dignitaries, politicians and theologians to solemnly proclaim their solidarity with the murdered and pledge, "Never Again," when many nights were seared with my mother’s screams as she revisited in her sleep the guilt of her survival and her helplessness in bringing her parents to safety.

Who needed to be reminded of the Nazi killing machine when my father’s desk was filled with paperwork documenting his stay in Buchenwald and his parent’s death in Treblinka, and we kids accompanied him on his frequent visits to the reparations office of the German Embassy to demand compensation.

Yet here in Israel, with my parents long gone and no known Yahrzeit date for any of my four grandparents murdered in the death camps, I find myself year after year yearning to mark the day in some meaningful way. At first, I would attend the official ceremonies at Yad Vashem. In those years, sitting in the cold, early spring Jerusalem evening surrounded by hundreds of survivors and their families, dwarfed by the dark symbolic sculptures and the flickering eternal memorial flame, I found it hard to evoke much emotion. What did rise up from my soul as I listened to the poems and the familiar poignant songs at the commemoration was the feeling of gratitude and wonderment that a little more than half a century after my grandparents were killed, I had somehow merited to live and breathe and pay taxes in the Jewish state.

These days, I no longer go to the official ceremonies. Fewer and fewer survivors are there too, since not many have the stamina to endure the lengthy security procedures, the wait for the president and prime minister to arrive and the hour-long ceremony itself. Besides, how many times can we listen to the pronouncements of the politicians and watch the endless laying of wreaths ?

This Yom Hashoah, as dusk descended and the somber memorial day unfolded, I found myself at the Israeli premiere of a powerful play by Bernard Weinraub called ‘The Accomplices,’ that dealt with the failure of the US government and the organized Jewish community to intervene in the Holocaust.

On the way home, it’s easy to sense the heaviness that descends on the city. Flags fly at half mast; all cafes and places of entertainment are closed; only somber music plays on the radio.

On the morning of Yom Hashoah, the country comes to a standstill at precisely 10 a.m as the sirens wail marking the only ritualistic aspect of the day. I’m standing on Rachel Imeynu Street during the two minute call to attention. It’s a moment of solidarity and comfort as the nation joins together in remembrance and resolve. In Musrara, on Jerusalem’s seam between the eastern and western parts of the city, Israel’s schizophrenia is exhibited for all to see. My son who lives in that neighborhood reports that the Arab commercial area doesn’t miss a beat even as the Jews bring traffic to a halt just a few yards away.

My teacher and mentor, Rabbi Avi Weiss, has written extensively about the need for ritual in assuring Holocaust memory. "I am concerned about how the Shoah will be remembered. Survivors are growing older. Neither can Shoah memory be entrusted to the museums. While they are of importance for memory, there are those controlled by universalists who take their orders from non-Jewish institutions. We dare not allow the Shoah to be politicized. Nor will the camps where the horror took place tell the story. Too many have already been Christianized and the emphasis on financial restitution has raised other serious challenges. No doubt assets should be recovered. Still, our community should be concerned that as this effort continues, the Holocaust will be remembered for stolen money rather than for stolen souls.

The only way to ensure the Shoah will be remembered is through Jewish ritual; by speaking and re-enacting what our people endured sixty years ago, much in the same way as we do for yetziat Mitzraim (the Exodus from Egypt)." Rabbi Weiss goes on to suggest various meaningful rituals that would go a long way to effectively preserve memory.

Here in Israel, along with the need to appropriately memorialize the Shoah, there’s a rising awareness of the urgent need to take care of the remaining survivors. It’s estimated that more than 80,000 of the 240,000 survivors in Israel live in dire poverty. The meager monthly compensation allowance from the Finance Ministry stands at 1,040NIS (about $250), but even this is only paid to those who arrived before 1953. Recent Knesset legislation has provided more assistance, but to date only 2,000 out of 8,000 survivors eligible have actually received any payments. As one radio talk show noted in his Yom Hashoah morning broadcast, "When Yom Hashoah is over, almost all our politicians will go back to their petty squabbles and fights over their own pensions and their budgets that pay for phones and newspapers for life."

All afternoon, despite the bright sunshine outside, I can’t help but stay glued to the TV, watching documentary after documentary of almost unfathomable tales of every facet of the human experience that took place during and after the Shoah. I long ago found it impossible to read any more Holocaust memoirs, but there’s something compelling about hearing the incredible stories of those who survived and made it to Israel; seeing on film how second generation Israelis are trying to unearth the truth about their parent’s experiences.

At the end of the day, as the memorial candle on my window-sill burns down, after all the talk and ceremony, there are, of course, no new answers to the greatest tragedy to befall the Jewish people in the modern era. What remains is a sense of protracted shiva. We get up and resume our lives, internalizing our collective memories.