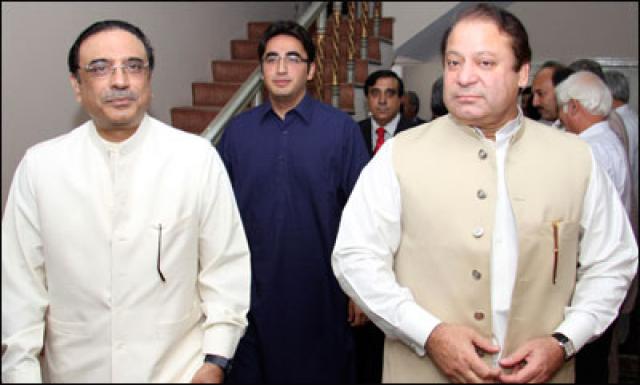 In the latest move here in Islamabad, the ruling coalition partner Nawaz Sharif of PML-N, the former Prime Minister of Pakistan, has announced to break-away on the issues of reinstatement of judges and the coming presidential elections. He vowed to keep continue his struggle for the restoration of judges and named Justice (R) Saeeduzzaman Siddiqui as presidential candidate of the party against the PPP nominated candidate Mr. Asif Ali Zardari. "We have taken this decision after we failed to find any ray of hope and none of the commitments made to us were fulfilled" by Zardari, he told a news conference. "This situation forced us to withdraw our support and sit on opposition benches," he added.

Flanked by Punjab Chief Minister Mian Shahbaz Sharif, Justice (Retd.) Justice (R) Saeeduzzaman Siddiqui, Chaudhry Nisar Ali Khan, Raja Zafar-ul-Haq and other PML-N leaders, Sharif made the announcement while addressing a jam-packed news conference here on Monday. He referred to his meetings with slain leader Benazir Bhutto during their exile and told the reporters that she was committed to bring the true democracy and wanted to putting an end to dictatorship in Pakistan. He said a number of agreements were made on various matters between the two leaders which were later given a name of Charter of Democracy. Agreements were also made in Murree to maintain and continue this cooperation, he added. In a related development another partner of ruling PPP, the Jamiaat-E-Ulemai Islam chief Maulana Fazal-ur-Rehman has said on Monday that Asif Ali Zardari’s remarks regarding PPP-PML-N agreements have developed new situation of non-trust, adding JUI now find it difficult to keep the coalition with the PPP. He was talking to media persons during visit to relief camps set up in Peshawar. Rehman expressed his concerns over remarks of Asif Ali Zardari about political agreements signed with PML-N.