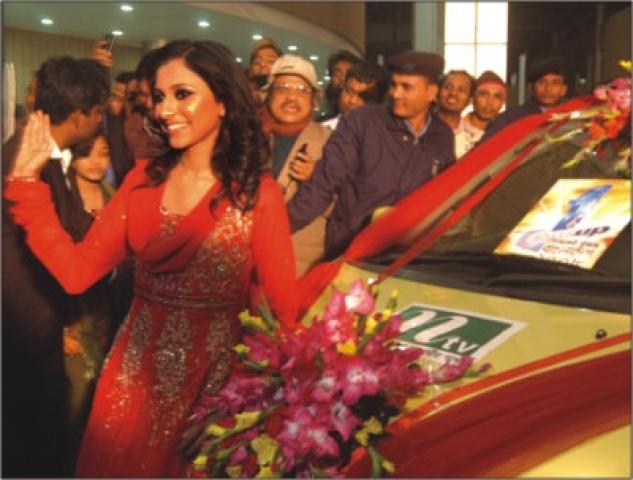 "When I heard my name being announced, it took a while to register. I went running to the MC Putul Apu and asked her if she was calling me,” said Sania Sultana Liza, recalling the moment when she was crowned the winner of "Close Up 1 2008". The grand finale was aired live from Bangladesh-China Friendship Convention Centre.

The Daily Star caught up with the young singer recently. Liza talked about her experiences in "Close Up 1", her ambitions and more.

"I had an inherent interest in music since childhood. Noticing that, my father encouraged me to take music lessons. I started training at the age of seven. My first teacher was M.A. Hye. He taught me the basics," said Liza.

"When I saw the first season of ‘Close Up 1’, I was simply amazed. I made up my mind that I’d take part in the contest," she added.

"I couldn’t take part at the second ‘Close Up 1’ but when the third season of the talent hunt approached, I was resolute.

"I can remember the day clearly. My SSC exams were on. It was on April 9, 2008 and I had my Accounting exam. I rushed to Amir International Hotel in Mymensingh where the ‘Close Up 1’ auditions were being held, straight from the exam. It was already 4 pm and my turn was in the morning, so I had already missed my turn. That’s not all. By that time the auditions were almost over, and people at the gates were reluctant to let anyone in.

"After waiting for a while, I was frustrated and just wanted to go home but my father said, ‘you’ve waited this long for this opportunity. You can certainly wait a little longer.’

"For almost an hour I was standing outside, then they let me in and I auditioned. And that’s how it all began," said Liza about her initiation in "Close Up 1".

Liza continued: "I’ll always cherish my days at ‘Close Up 1’. I had the greatest time there; I learnt so many things — the most important being discipline. At the camp everything was done in an organised manner. We were taught how to make proper use of time."

Speaking of the finals, the up and coming singer said, "Everyone, including I, was a bit nervous. We knew the finale would be aired live. There was no room for errors, as no editing can be done on a show aired live; millions would be watching. So, yes, the pressure was tremendous."

"Music is my passion, it is something without which I’m not complete. But my studies are also important. I’ll try my best to continue pursuing both," said the young singer.

"In time I want to become an accomplished artiste. I want to be a Chartered Accountant as well, and hope for blessings from everyone," said an ambitious Liza.