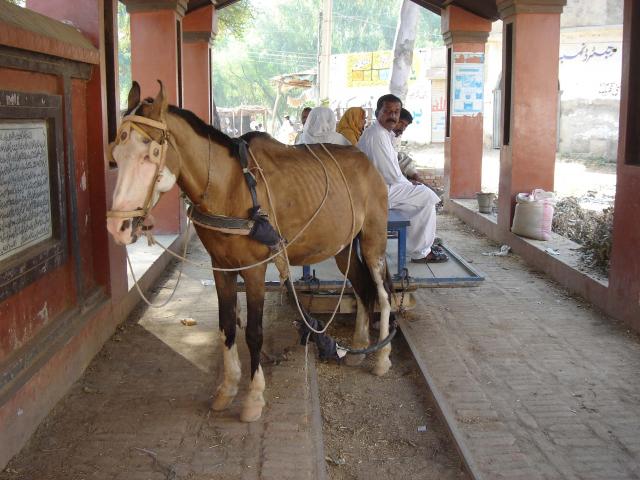 : Historical Horse Tram which is locally known as Anokhi Sawari (strange transportation) which was launched by Sir Ganga Ram in 1903 from Buchyana to Gangapur village. This is a two feet wide narrow rail track and 3 kilometers long where passengers are being carrying in horse trolley with the help of  horse who pulling it on this unique track. There were no source of communication and transportation in 1903  and that is why Sir  Ganga Ram who was an expert agriculturist and Engineer, designer brought these two feet width track from . Sir Ganga Ram was born in 1851 at Mangtowala town and was died in 1927 at . He was living in a small at district. The horse tram was handed over to Cooperative Farming society on and was running under supervision of this society.  Hence it was closed in the year 1992-93 due to negligence of local managing committee and people of the area were deprived from this cheapest means of transportation and communication. But former Nazim of Union Council Chak No. 591 Gangpur Rao Munawar Ahmad Khan who was also elected as president of the Cooperative Farmers Society who sent a numbers of letters to ambassadors of all embassies working in for financial support to re-launch this  important, historical  cultural heritage. He also established new Alkhidmat Citizen Community Board (CCB) and approached to Executive District Officer of Community Development Faisalabad Chaudhry Muhammad Nawaz who released some 540 million grant for re-opening of this historical and cultural heritage. 20% share of total cost was bear from local community through CCB and this historical Horse Tram was once again open after a gape of 17 years (closing).

District Coordination Officer (DCO) Faisalabad Syed Iqbal Wahla also took keen interest in its re-launching who approved for releasing of require fund. Rehabilitation work started on this track on and was completed in March 2010 and thus it was open for general public on . Nasir Khan Niazi Manager of the Cooperative Farming Society told this scribe in an exclusive interview. Now two horse tram running on this Safari track charging only rupees 5 from Buchyan to Gangapur while before launching of this Anoki Sawari Rikshaw and taxi drivers were charging rupees 15 from one side. He said that mostly of its made track have been stolen by the people and we purchased local made track for this purposes hence half of the length having original track of made.

Besides it Sir Ganga Ram also launched a big Orchard having hundreds of fruit trees as well as he opened a hospital at Gangpur but unfortunately it was de-graded to Civil Dispensary from Tehsil Headquarters hospital level but its building also present a desert and devastated look due to habitual negligence of health department of Punjab government. He also carried out a 3 kilometers long irrigation channel where mostly is under ground and irrigating a large number of land in the area. Sir Ganga Ram also established a hydro power house in Okara District namely Renal Hard. The cooperative farming society having its own source of income and have launched so many fund generating plans in the area who also constructed a building for post office and utility stores and were donated for this purposes without any rent.   The society also donated one Acre of Land for government Girl high School at pur. Highlighting meritorious services of Sir Ganga Ram Rao Munawar Ahmad Khan told on telephone from Saudi Arabi that he also designed Lahore High  Court and General Post Office. Meher Nazir Ahmad a veteran journalist of Jaranwala disclosed that Sir Ganga Ram also designed Church, Mosque and in the area with equal distance. He said that   Ram donated his personal house for girls college in . He said that , Ram hospital were built by his son Balak Ram. His meritorious services will always be remembered by the people of especially of .