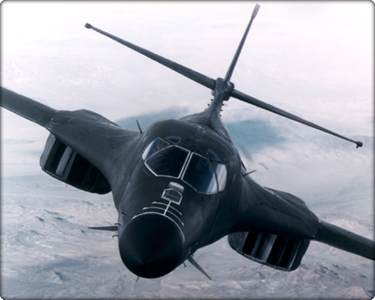 Application of laser peening avoided over $59 million in blade replacement costs, secondary damage engine repair costs, and cost avoidance from airfoil failures. Avoiding catastrophic engine failures over the remaining life of the B-1B/F101 program is estimated to have saved another $40 million to the US. Military. Pictured here a B-1B carrying a AGM-69 nuclear short range attack missile called SRAM. Unclassified.

Contained in the pages of the National Defense authorization act for year 2014 are recommendations for the military to adopt the use of laser “peening” technology.

Laser peening, or laser shot peening (LSP), is the process of hardening or peening  metal using a powerful laser.  Laser peening is often used to improve the fatigue resistance of highly stressed critical turbine engine components, and the laser (or component) is typically manipulated by an industrial robot. For more on laser peening see webpage  http://www.lsptechnologies.com/ and video: Laser peening priniciples http://www.youtube.com/watch?v=LOO8yN1_RdI).

In that report the committee also encouraged the Department of Defense “to examine the potential cost savings that may be derived from adopting this technology broadly across the military services, particularly for use on engines, aircraft structures, land vehicles and weapon systems.”

However, the committee is concerned that some military departments have not fully explored the use of such technologies to reduce costs associated with problems of fatigue failure, stress corrosion cracking, and component shape corrections. The committee further encourages the Department to explore such technologies for use in aircraft engines to slow the rate of replacement of highly stressed components and parts” (source: House Report 113-102 National Defense Authorization Act for Year 2014 http://thomas.loc.gov).